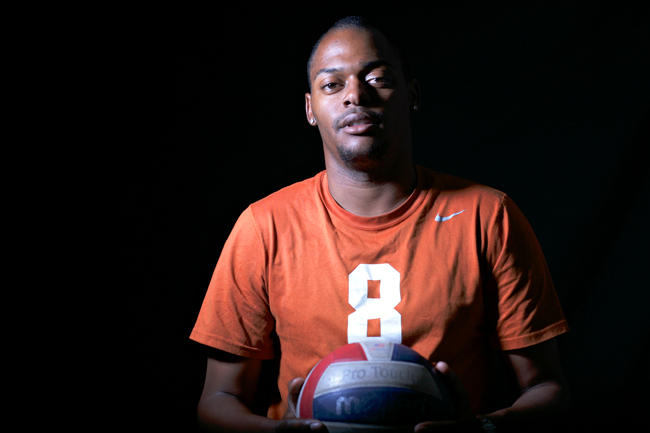 Lewis Hall stood in Bartle Hall in Kansas City, Missouri, next to the court on which he would play in the National Collegiate Volleyball Federation Men’s Division III Bronze Bracket championship game.

Hall took out his phone, opened Snapchat and took a picture of court No. 9, his late mother’s favorite number. He captioned the photo, “Playing on Mom’s favorite number.” Glancing down at his mother’s pink water bottle, which he used all weekend, he soaked in the moment.

Last year, Hall, now a 27-year-old educational administration graduate student, was unable to play in the NCVF Championships because his mother had been diagnosed with cancer. She moved to Austin so he could take care of her, but this past February, Hall’s mother died. Two months later, he found himself in Kansas City with a chance to play for a national championship.

“If you didn’t know what he was going through, you wouldn’t be able to tell by his outer personality,” said biomedical engineering freshman Zach Murray, one of Hall’s teammates. “It takes a strong person to push through such adversity, and Lewis is definitely that person.”

“I know she would’ve been really proud,” Hall said. “I knew that [playing volleyball] was my way of fighting for her.”

Texas ended up defeating Michigan in the title game, winning the first game 25–12 and the second game 25–18. Hall was able to honor his mother by claiming a national championship, a culmination of a season Hall used as a coping mechanism ever since his mother’s death.

“It was an outlet for me to be able to play volleyball,” Hall said. “It was a good stress reliever and [gave] me peace of mind with the tough times we were dealing with.”

Hall began playing volleyball as a freshman at Quartz Hill High School in California. He simply had an interest in picking up a sport, and he had multiple friends trying out for the team. Hall went on to found a club volleyball team as an undergrad at California State University-Monterey Bay before playing on the club team as a graduate student at Texas.

Once he completes his graduate degree in May, Hall plans to look for an opening at UT. He would be open to the idea of becoming an assistant coach for the club volleyball team and giving back to the program that gave him so much.

“Being a part of something that really connects you to a campus and is bigger than yourself — I think those things are priceless,” Hall said.