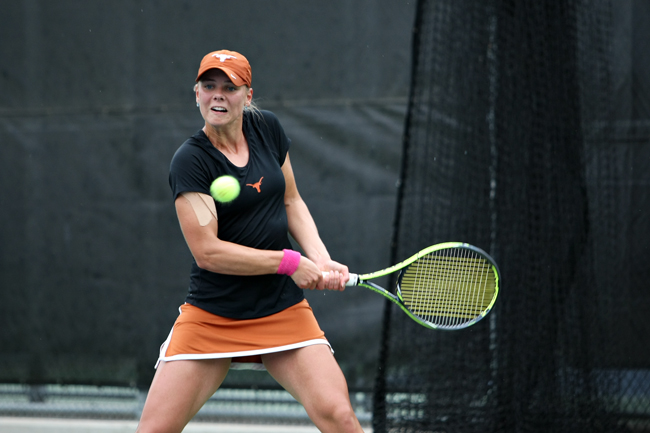 Lina Padegimaite’s mind is almost always on her academics. In the training room, mid-treatment, Padegimaite peers closely at the notebook on her lap, focusing intently.

The senior tennis player said she never imagined playing a college sport and making good grades would be as time-consuming as it is. Padegimaite, a native of Lithuania, learned to juggle school and tennis early on in her life and does not procrastinate as a rule. The discipline she practices in all areas of her life has paid off — Padegimaite has never had to pull an all-nighter for classes.

“I’m trying to get my schoolwork done before 11, so I have to make sure I get enough sleep to endure the practice tomorrow — because if you’re sleepless and you come into a Texas weight session or conditioning, that’s not going to last,” Padegimaite said.

Padegimaite calls herself “that” front-row student with her hand constantly raised or writing down notes.

“I can’t do the computer thing — I always handwrite,” Padegimaite said. “People still make fun of me because I’m graduating college with all A’s and one A-minus, and I can’t type without looking at the keyboard.”

Padegimaite, who will graduate in the spring with a degree in exercise science, was recently named to the Academic All-Big 12 Women’s Tennis Team for the third-consecutive year. Her academic productivity has even transferred to her friends, who have picked up some of her traits.

“I used to stay up late [finishing homework], but I haven’t really since I started living with her,” said astronomy senior Sarafina Nance, Padegimaite’s roommate. “Living in that environment inspires me to put more effort into my fitness and classes.”

Padegimaite has also found success on the court. Through her four years at Texas, she has earned Big 12 Conference Freshman of the Year, All-Big 12 Doubles and even a Big 12 title in No. 5 singles. This season alone, the senior has proved her leadership on the team. Against Michigan State, in what Padegimaite called the highlight of her senior year, she overcame a huge deficit to bring the only points to Texas’ scoreboard.

“I was in this match where I was down in the third-set tiebreaker 9–1, and I came back to win it 11–9,” Padegimaite said. “I had to win 10 points in a row, which is pretty hard in any tennis game. Tennis is a huge mental game more than physical. For me, it’s about relying on my own skills and going for it, instead of holding back.”

This weekend, Texas faced its last two opponents of the regular season, Kansas and Kansas State, in Austin.

“It’s sad and exciting at the same time because I am an emotional person,” Padegimaite said. “When I step out on that court, knowing it’s my last match, I know I can get emotional, but I still have to do my job and get the win for the team.”

For Padegimaite, finishing college doesn’t mean closing the chapter at UT. She will be pursuing physical therapy at Texas State after she graduates but said she wants to stay connected to the community.

“I don’t think I’m going to end with this match or end with me graduating,” Padegimaite said. “There is a Texas Exes Association that can keep me involved and be a part of the Texas family forever.”

Kinesiology lecturer Michael Sanders described Padegimaite as one of his best students. His wife, Barbara, is a chair in the physical therapy department at Texas State, where Padegimaite plans to study.

“I have an insight into all the things that being a physical therapist entails, and Lina is a unique individual that will excel at it,” Sanders said.

Texas recognized Padegimaite on Sunday for Senior Day before the match against Kansas, in which Texas toppled the Jayhawks, 4–0. And this weekend, Texas travels to Waco for the Big 12 Championship, where Padegimaite looks to end her college career with another highlight.

“I’m not trying to put a lot of pressure on myself or anything,” Padegimaite said. “[I’ll] perform with pride and know this is an opportunity for me to shine. I’m just going to go all out like I always do.”