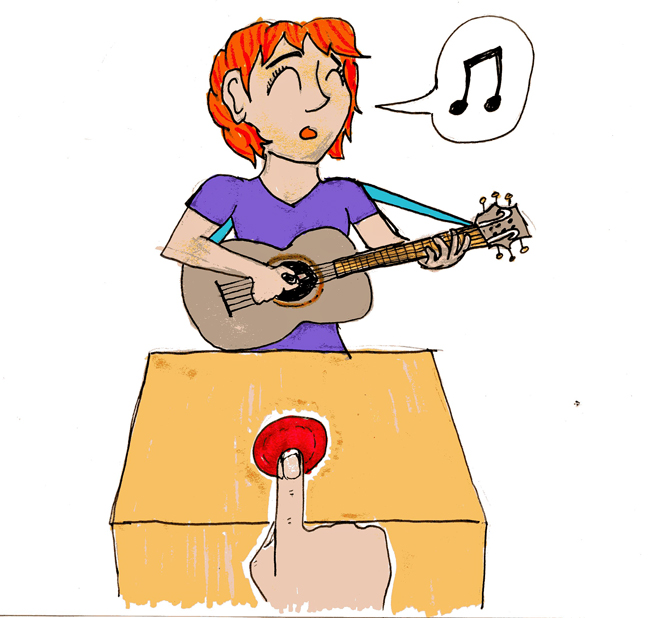 With the push of a button, students wandering campus this weekend can summon a sudden performance from a string quartet, a guitar-strumming vocalist or a magician lying nearby in wait.

The artists are performing as part of Push4Art, an annual, campus-wide series of pop-up performances that feature student talent and aim to be a accessible way for students to appreciate art in a casual setting. Hook’em Arts, an organization that aims to increase engagement with and awareness of Texas Performing Arts, hosts the event and will celebrate its two-year anniversary Friday. Theatre and dance senior Sean Tecson, who helped create last year’s Push4Art, said the pop-up performances provide students with any special talents to perform.

“The Texas Performing Arts tours professional artists, but, for me, there’s a lot of merit in young artists,” Tecson said. “It’s a fun way to engage in performing arts, and it’s a fun way to explore young talent.”

For the event, members of Hook’em Arts constructed and painted a wooden podium with a red button on its center. Every hour, members wheel the podium to various locations around campus and hide until bystanders press the button. Once someone does, the performers come out of hiding and begin their show. Timothy Rogers, Texas Performing Arts student engagement coordinator and Hook’em Arts adviser, said the button helps change audiences’ perceptions of what it means to watch a show.

“Whether [button-pushers] understand that’s what they’re doing, they are specifically requesting a performance,” Rogers said. “When you go to a concert hall, you’re in a certain mindset, and you’ll behave a certain way. Push4Art is all about trying to break the norms and just to have fun.”

“Once they did push it, a cellist came out to set up, and the reaction and surprise to that was really cool,” Tecson said. “It’s fun to see their enjoyment when they see it’s a pop-up performance.”

“People came up to thank me,” Martinez said. “The songs I played were something they haven’t heard in a while, and they were happy to hear it randomly on campus,” Roger said.

While artists also perform showcases in traditional artistic settings, they received considerable positive attention for their flexibility during Push4Art — and got especially good feedback for the magic acts.

“Many people think that doing a magic trick wouldn’t be the same as going to see someone sing a song,” Rogers said. “They don’t necessarily think of it as a performing art, but it is.”

Martinez said artists are no longer limited to traditional ideas of what art is.

“It’s not just boring chamber music or a dead guy’s paintings,” Martinez said. “It’s new and modern and exciting. Push4Art is going into public spaces and shoving art onto people. We don’t expect them to clap when it’s over — we just want them to live it.”