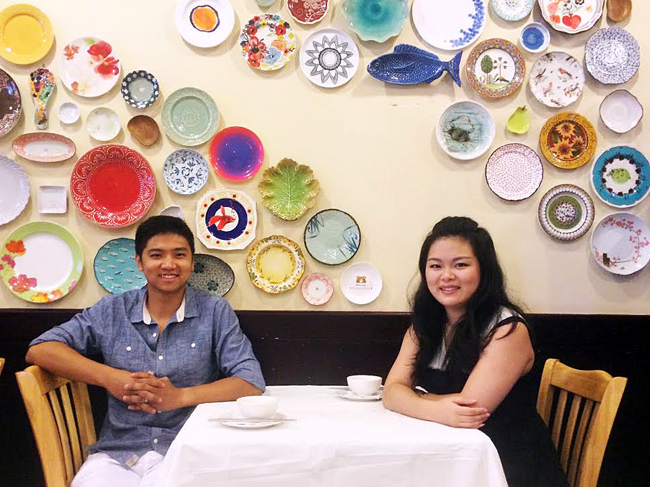 The restaurant, located in Houston’s Chinatown, is owned by UT alumni Cori Xiong and Heng Chen. Xiong moved to Texas from the Sichuan province of China when she was 12 years old. Chen left his home city of Shenyang, China, for the U.S. when he was 16 years old. When the now-husband-and-wife met at UT, they discovered a shared passion for Sichuan Chinese food.

After Xiong and Chen graduated in 2009 with economics degrees, they decided to take a leap of faith and jump into the restaurant business. They set up a shop in Houston’s bustling Chinatown, offering lunch plates and Sichuan staples. They lacked experience in the business, which at times made the work challenging.

“We pretty much had to cross the river by feeling the stones,” Chen said. “Hiring the right people, keeping the good people and leading these people has always been a challenge.”

On Friday, Xiong presented some of her restaurant’s signature dishes at Taste of Texas, a part of the Austin Food and Wine Festival.

“I’ve loved seeing so many non-Chinese people enjoying our food and not taking it as something weird and exotic,” Xiong said. “I feel like I’ve bridged some gap between different cultures.”

Xiong and Chen named Mala Sichuan Bistro after the restaurant’s signature flavors. In Mandarin Chinese, ma refers to the numbing sensation caused by peppercorns native to the Sichuan province, and la refers to the spicy flavor of red chili peppers.

“Numbing is a flavor — or more of a sensation — that most people do not know humans are able to taste,” Xiong said. “Our spices activate the touch sensory receptors and make each one of the nerve endings in the tongue and the mouth area think that they’ve been repeatedly lightly touched, like a constant light buzz.”

To set their restaurant apart from the several traditional spicy Sichuan restaurants in Houston’s Chinatown, Xiong and Chen added an alcohol menu and prioritized establishing a friendly ambience.

“I want to excite the diners with the bold flavors of food and perfect pairings of beer and wine that they don’t usually see in ethnic restaurants,” Xiong said. “But I also want to give them some bits and pieces of impressions on Sichuan culture and my hometown.”

The duo will soon open a Mala Sichuan Bistro location in Montrose, a trendy neighborhood of Houston. The restaurant’s new location will be across from the restaurant Underbelly, a critically acclaimed mainstay of Houston’s food scene. Chris Shepherd, Underbelly owner and executive chef, said he looks forward to his new neighbors.

“Mala has become a destination restaurant in Chinatown,” Shepherd said. “People who weren’t previously familiar with Chinatown have now experienced Houston’s incredible Asian cuisine as a result of Mala’s influence. The Montrose location will touch an even larger group of inner-loop Houstonians, and I hope it opens the door for even more exploration.”

Although Xiong and Chen have specifically reached out to non-Chinese customers, they said their priority is to serve up authentic Chinese food.

“I want to offer an experience that is different from other Chinese restaurants,” Chen said. “But I still want to let diners know that this is the real, traditional Chinese food — that this is what people eat in China — not egg rolls or orange chicken.”