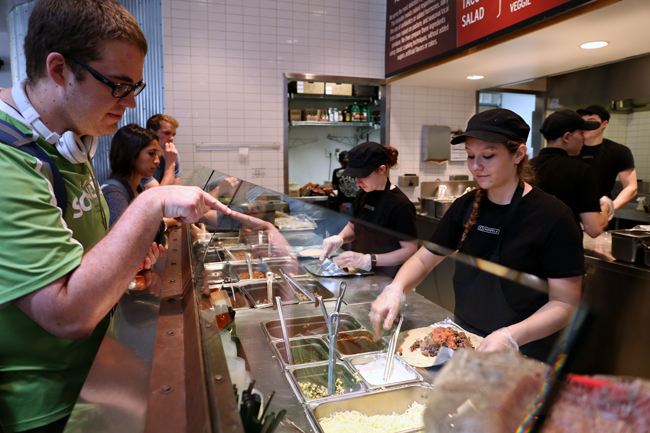 Chipotle has introduced a delivery service for all of its menu items through the website and mobile application Postmates.

Postmates coordinates a system of local couriers who deliver items, including food and groceries, to customers. Postmates was founded in San Francisco and currently operates in 67 cities. The Chipotle partnership began last week and will operate throughout every city in which Postmates is located.

The delivery fee for Postmates ranges from $4.99-$7.99, depending on the total distance the courier travels. On top of the delivery fee, Postmates charges a nine percent service fee on the cost of the Chipotle order.

The Chipotle management and marketing team declined to comment on the partnership.

Even before the partnership was official, customers have been able to order Chipotle through Postmates, and both companies have already profited as a result.

According to Forbes, Chipotle saw a 30 percent monthly growth in customers’ use of Postmates for Chipotle orders in 2015. Additionally, Postmates reported $500,000-worth of Chipotle deliveries in the first quarter of 2015.

Mathematics junior Chris Lin said he believes Postmates’ partnership with Chipotle will increase its value in comparison to other delivery service applications, such as Favor.

“Even though Postmates’ delivery fee may cost more than Favor’s delivery fee, Postmates’ partnership with Chipotle adds an incredible value to the app,” Lin said.

Postmates’ ordering process with Chipotle remains the same as its ordering process through other restaurants, despite the official partnership between Postmates and Chipotle, Morrison said.

“We haven’t had any complications with delivering orders from Chipotle,” Morrison said. “Postmates’ customer service team will call in orders ahead of time and put them under the Postmates name.”

Postmates and Chipotle are working on the details for a system that will streamline the ordering process, Morrison said.

Biomedical engineering freshman David Sung said Postmates will become more popular over the last month of the school year because of its partnership with Chipotle.

“When people are studying for their final exams in the next few weeks, they are going to want to eat without wasting study time,” Sung said. “That’s when they use Postmates for Chipotle.”