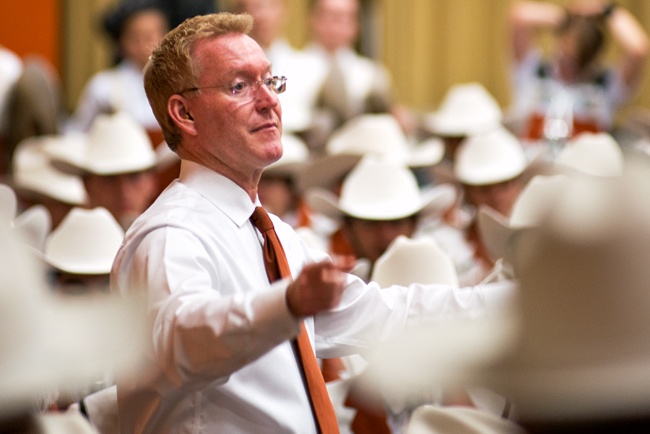 Carnochan said the band has made minor changes to some of its shows, but its core aspects have remained the same during his tenure as director.

“I give a lot of credit back to Vince DiNino and his building of the band from 1955–1975 to create what exists now,” Carnochan said. “My job is more of maintaining it. I’m a steward here of carrying on the tradition of the greatness that was developed during the DiNino years.”

Carnochan said he wants the band to know that LHB members need to work together to carry on a tradition of excellence into the future.

“This is not my band,” Carnochan said. “It’s the University of Texas band, and all of us have the privilege of being involved with it. We need to respect it, and we need to carry on the great traditions.”

Carnochan said his biggest achievement while directing the band was bringing people together from all walks of life.

“The group is so diverse with so many people from different walks of life,” Carnochan said. “[My biggest achievement is] trying to get all of those people from all over the state of Texas and work toward a common goal and, most importantly, to act with great class and respect toward the institution itself.”

“He was a very stable influence,” Junkin said. “Certainly we hope to find those qualities in addition to his obviously strong musicianship.”

Junkin said the next band director has not been selected yet.

“I want a band director who will come with a passion for perfection but respect for our traditions,” Garrett said. “LHB is a very old band with lots practices unique to us and our style. We are the showband of the Southwest, and I hope any new director will help us maintain that proud title.”