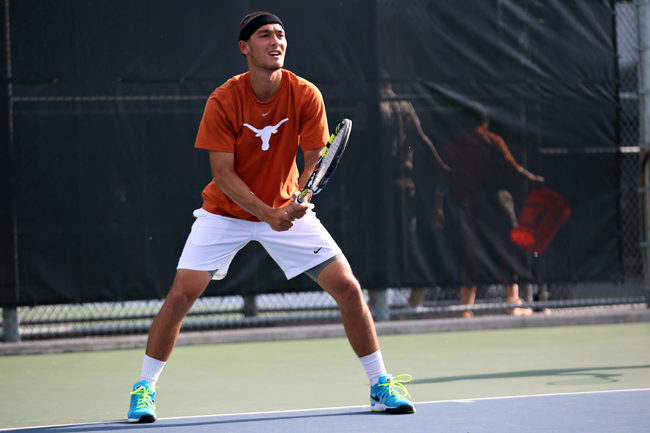 Texas (19–6, 2–3 Big 12) will enter the tournament, which begins late next week, as the No. 9 overall seed and will face Navy in the first round at the Caswell Tennis Center in Austin. Navy posted a 20–10 record this season and entered the tournament as an automatic qualifier after claiming the Patriot League title.

The Longhorns come into the NCAA tournament after losing three of their last four matches, with all three losses coming against teams seeded in the top five of this year’s tournament. Despite the team’s struggles, head coach Michael Center remains confident in his team’s chances.

“We lost three of those last four, but we lost to some of the best teams in the nation,” Center said. “We believe that we can compete with any team in the country, and we’ve got a senior–laden team, so I’m excited to see what we can do.”

Prior to the tournament selection, Texas’ most recent match came against No. 1 Oklahoma in the semifinals of the Big 12 Men’s Tennis Championship. The Longhorns lost by a score of 4–3, with sophomore George Goldhoff dropping the deciding match in a third-set tiebreaker.

“I think that match really motivated us as a team,” Goldhoff said. “Obviously we were pretty devastated initially, but we’ve got two weeks now to train and practice, so we feel good about it.”

While the competition in the NCAA Tournament is undoubtedly tough, it’s nothing the Longhorns haven’t faced yet this year. Texas squared off against seven teams currently ranked in the top 20 of the ITA rankings this season, with three of those teams — No. 1 Oklahoma, No. 2 Baylor and No. 5 TCU — coming from the Big 12.

“We were prepared really well for the NCAA Tournament playing three teams that are contenders for the national championship in our own conference,” senior Søren Hess–Olesen said. “We know the kind of level we need to play at to win the whole thing, and our schedule has definitely helped prepare us.”

Tournament play for Texas begins May 8. If the Longhorns can defeat the Midshipmen, they will face the winner of California and Texas A&M-Corpus Christi in the second round.