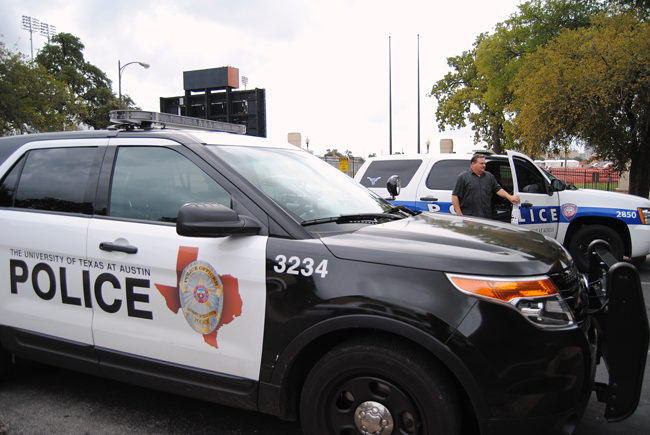 UTPD is stepping it up with the addition of new SUV’s.  With nearly $15,000 of police equipment per vehicle, new Ford Explorers will endure wear and tear while ensuring an optimum environment for officers to work on the go. " />

UTPD is stepping it up with the addition of new SUV’s.  With nearly $15,000 of police equipment per vehicle, new Ford Explorers will endure wear and tear while ensuring an optimum environment for officers to work on the go.

In the early morning hours of April 25, Indiana University student Hannah Wilson was beaten to death. Reported missing the day before, her body was found in Needmore, about 20 miles from campus. The investigation into Wilson’s death led to Daniel E. Messel, who was arrested the same day. According to CBS News, Messel has a history of violence against women that spans decades. One investigator suggested to FOX News that Hannah Wilson’s disappearance is “eerily similar” to that of the 2011 disappearance of another IU student, Lauren Spierer.

Hannah Wilson is just one tragic example of the safety risks college students face. According to UTPD’s daily crime log between Feb. 26 and April 25, other than a medley of public intoxication, possession, and theft charges, there were 25 instances of interpersonal harm. There was one sexual assault, two harassments, four assaults that caused bodily injury, two assaults in which physical contact of an offensive or provocative nature was made, one violation of a protective order, four terrorist threats, two counts of prohibited weapons and three counts of deadly conduct in one incident alone, three indecent exposures, one disorderly conduct in which the anus or genitals were exposed in public, one disorderly conduct charge of an abusive, indecent or profane nature, and one charge of dating violence. And these were just the crimes reported to the police.

The University has long been called on to increase campus safety efforts, but perhaps never has it received more attention to it than in recent years. As a rising sophomore at the time, I remember the string of abduction and sexual assault cases that took place along 26th street in the summer of 2013. But as the UTPD crime log demonstrates, campus safety is more than two perpetrators; crime can happen any time, anywhere. And it does.

There have been a number of efforts to increase campus safety from institutions other than the University administration. The Rady-Strickland administration instituted SafeRide to carry student safely from sixth street to West Campus, though admittedly the goal of this was to reduce drunk driving in and around campus. SURE Walk, which is a volunteer program that provides students with safe walks to and from campus between 10 pm and 2 am Mondays through Thursdays, is another SG effort to increase student safety at night.

These are all excellent places to start in the fight to make our campus safer. I encourage every reader to take advantage of these programs.

But what isn’t so great is the one thing these programs have in common: they are student efforts with no institutional support. That is simply unacceptable. Our university has a $25 billion endowment, the largest of any public university in the nation. It needs to be put towards what matters. Student safety should be a priority. We deserve to be supported by the administration; the University owes us our safety on campus.