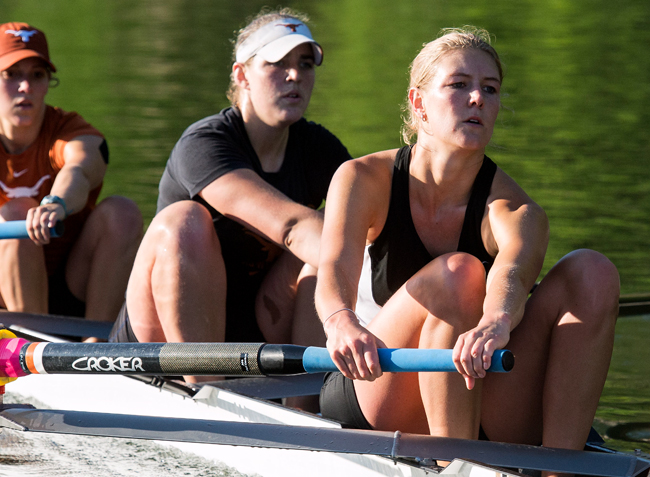 “I actually mind blanked, and I didn’t hear my name,” Glennie said. “I think I was in damage control mode and already processing defeat. I couldn’t remember what had just been said, and then the girl next to me said, ‘That’s you.’ Once I realized, it was immediate elation.”

Glennie, a scholarship athlete on the varsity rowing team, was one of 84 students worldwide to be selected to the 2015 class of Rhodes Scholars and one of three from New Zealand. A native of South Africa, Glennie moved to New Zealand at the age of 3. She excelled in basketball, track and cross country in high school and took up rowing at the suggestion of a cousin who was studying in the United States, and it was on the water that she found the most satisfaction.

“My cousin said, ‘Jess, do rowing. You can get a scholarship to America because you’re tall,’ so I started rowing when I got to high school,” Glennie said. “A couple of years in, I decided, ‘Wow, I’ve stuck this out, and I love it, so I will try that America thing.’”

The combination of a top-ranked architecture program and a Division I rowing team drew Glennie to Texas. She said balancing the two can be a challenge, but it has its benefits.

“They actually reinforce and help each other in a lot of ways that you wouldn’t realize,” Glennie said. “Rowing keeps me healthy, reinforces a routine.”

As a sophomore, Glennie rowed in the second varsity eight boat that placed first at the 2012 Big 12 Championships. She remained in that same boat her junior year, but missed her entire fourth season because of a concussion.

“Even though she’s had some setbacks, I’ve been so impressed with her outlook and her attitude throughout,” head coach Dave O’Neill said. “She’s been very positive, and she’s the fittest she’s ever been.”

Glennie interned at an architecture firm in New York City in the fall, so she was unable to participate in the first fall workouts under O’Neill, who replaced longtime head coach Carie Graves in June. O’Neill said there was a noticeable change in the team once she returned in the spring.

“She’s been a very vocal leader,” O’Neill said. “I think she’s recognizing how special this year is, and she’s working really hard to make the most out of her last semester with our team.”

As a Rhodes Scholar, Glennie will spend the next two years at Oxford University studying environmental change and management. Her short-term goals include graduating and finishing her rowing career on a high note, but her long-term goals are a little harder to define.

“I know that this is going to be such a life-changing experience that I don’t think long-term goals are really relevant right now,” Glennie said. “So all I really know is that I want to make a really positive impact in the world.”