Science Scene: Vaping not as bad as smoking, but still raises health concerns 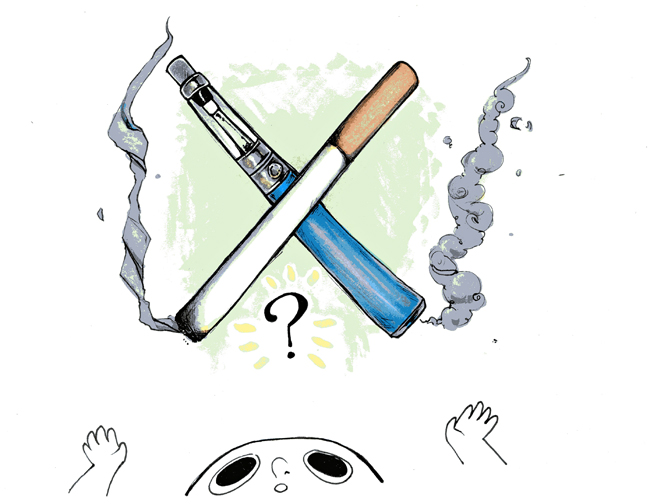 Cigarette use in teenagers fell by over 40 percent from 2011–2014, according to a survey the Centers for Disease Control and Prevention and FDA released this past month. That’s the good news.

The not so good news? The same report shows teenagers use of e-cigarettes increased nearly eight-fold during that time.

E-cigarettes are a 21st century take on smoking. They use a battery-operated device that looks like a cigarette and turns liquid from a cartridge into an aerosol. But since vaping arrived on the market less than a decade ago and only gained popularity within the last five years, scientists can’t yet study long-term effects. For that to happen, it will take more time.

Vaping, the term for using an e-cigarette device, is a tobacco-free process, except in cases when small amounts of tobacco are used in the liquid cartridges for flavoring. There is a lower risk of the adverse health effects, such as lung cancer, associated with traditional smoking — still the leading cause of preventable disease in the U.S.

Vaping is still a delivery system for nicotine, the chemical that gives cigarettes their addictive qualities. And while scientists do not believe nicotine causes cancer, it’s associated with raised blood pressure, increased heart rate and birth defects. It’s also associated with problems in brain development for adolescents.

It’s also difficult to judge the safety of e-cigarettes independent of their context. Some people use them as a replacement for traditional cigarettes, and, for them, the switch is a step in the right direction. E-cigarettes are safer than cigarettes, but that is largely because cigarettes have a long list of health risks associated with them.

Some retailers have promoted e-cigarettes as a method to quit smoking in the past, but the FDA no longer allows presenting them that way. Although there is some research to support the idea, the FDA doesn’t endorse vaping for this purpose as they do nicotine patches or nicotine gum.

The somewhat ambiguous nature of the health risks in e-cigarettes — such as secondhand or “passive,” vaping — have made it difficult to classify them in terms of public policy.

Laws about e-cigarettes are also ambiguous because they haven’t been around long.

The CDC recently reported that there are no laws against selling e-cigarettes to minors for 10 states in the country, including Texas. And, while individual
cities have specific legislature to deal with this problem, Austin isn’t one of them. As of now, many of the e-cigarette retailers in the area will not sell to anybody under the age of 18 even if it is technically legal.

So all of this information leaves the question: Should you vape? Probably not. Nicotine is addictive and not very good for your body. But neither are Lil’ Nookies from Torchy’s. Or pulling all-nighters. It would be irresponsible to suggest that e-cigarettes are a good idea, but, at the same time, personal health shouldn’t be the only factor in decision-making processes.