New musical, ‘How To Be Super,’ allows students to don capes and take to the stage 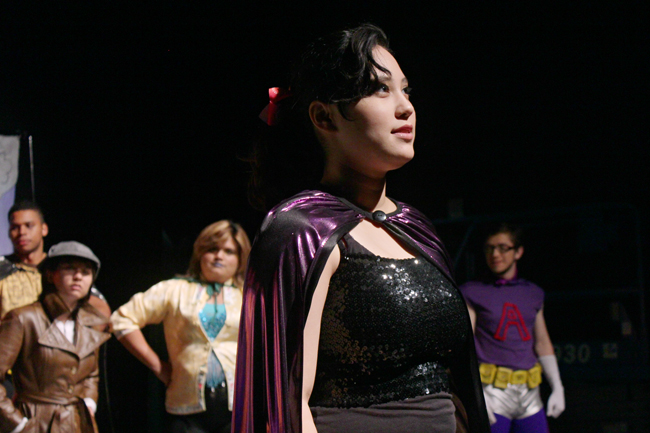 Hot Sauce Guy and Mr. Butter-Side-Up may not have super strength or super speed, but these underdogs will attempt to save the city of Brighton from darkness in the SAC Black Box Theatre for the next four days.

Creative Arts + Theatre’s student-produced musical, “How To Be Super,” premieres Thursday and runs until Saturday. Written and directed by psychology and English senior Sandy Lam, the story follows amateur superhero Lightning as she struggles to join the town’s elite hero conglomerate, the Superhero Syndicate.

When a citywide blackout traps the Syndicate in its headquarters, Lightning and other amateur heroes, whose powers include spicing up food and perfectly buttering toast, must save the day.

Lam said her inspiration for the play grew from her own experiences attempting to join organizations — as a senior on the job hunt.

“I’ve had a lot of rejections this school year with not getting jobs I want,” Lam said. “People in this organization have supported me. In some ways, the script can be seen as a ‘thank you’ for the people who have helped me.”

In “How To Be Super,” a live band will accompany the cape-clad characters as they dance and sing to original songs, including “I Should Have Peed,” “What Makes a Hero” and “We Can Do It Together.” Lam said Creative Arts + Theatre has students create the music and choreograph the dance numbers in order to promote leadership development.

“We have a lot of people who have never directed and never taught anything before, but they want to learn, so we are developing those skills,” Lam said.

To give students even more opportunities to foster creative talents, Creative Arts + Theatre members added a new element to the musical-planning process this year — a costume department. Instead of asking actors to come up with their own costumes, as the group has done for past musicals, this year, a student costume director made the superhero capes and masks.

“I think ‘How To Be Super’ is a really big step in rebuilding our organization and offering new opportunities,” Lam said.

Auditions for the roles were open to students of all majors. Electrical engineering freshman Belana Torres plays Lightening, the lead. Torres was involved in theater in high school and said getting to be a part of this play has allowed her to have a creative outlet in college.

“It’s nice to break way from the engineering side and come to theater,” Torres said. “It’s a new environment, and you get to meet a lot more people who aren’t in engineering.”

Adriana Tapia, show director and corporate communications sophomore, said she thinks students will be able to relate to the underdog characters in the play.

“You get worn down and tired, and all you want to do is give up,” Tapia said. “I think everybody feels that way in college sometimes because of all the stress, but, with good friends and good community around you, you can get through whatever. Anybody can be a hero.”