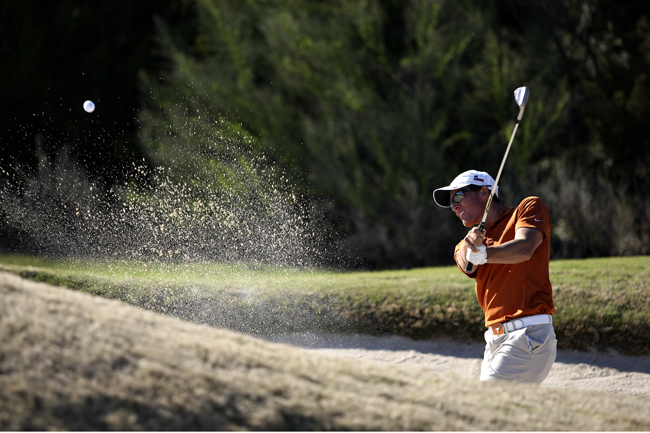 The No. 2 men’s golf team is victorious once again. On Wednesday, the Longhorns claimed their third-straight Big 12 title at the Big 12 Conference Championship in Tulsa, Oklahoma.

The team won in landslide fashion, finishing 24 strokes ahead of runner-up Texas Tech with a four-round total of 1130 (+10). With this win, Texas set the Big 12 record for largest margin of victory at a championship, breaking Oklahoma State’s 20-stroke record set in 2008.

“To have a 20-shot lead going into the last day is different, and that doesn’t usually happen,” head coach John Fields said. “A 72-hole event is also different — we only have one other tournament in college golf that is 72 holes, and that is the national championship. This is great preparation for us.”

“Southern Hills is a great golf course; it’s extremely difficult,” Fields said. “It was prepared so that it was at championship caliber. The greens were running at 12.5-13, which made the premium on accuracy — from the tee and the fairway — exceptional.”

Perhaps even more exceptional was freshman Scottie Scheffler. Scheffler earned medalist honors at the championship, finishing in first place on the individual leaderboard with a four-round total at even par. Scheffler is only the fifth player in Texas men’s golf history to win a Big 12 Championship.

“It feels great,” Scheffler said. “I got off to a bad start but was able to turn it around and start hitting some better shots. I’m really glad that the team was able to get it done after having a nice lead going into today. We have a lot of momentum going into the next tournament.”

Other notable performances came from sophomore Gavin Hall and senior Kramer Hickok. Hall finished two strokes behind Scheffler to notch a career-best second-place ending. Hickok finished in a tie for fifth, his second top-five finish this season. Sophomore Beau Hossler rounded out the top-10 finishes for Texas in a tie for eighth.

Next up for the Longhorns is the NCAA Regional Championship. Since it won the conference championship, Texas automatically qualifies for a regional tournament. The regional selection show will be broadcast live at 9 a.m. next Monday on the Golf Channel.