Where are they now? Former defensive end Sam Acho plays for Chicago Bears, works toward MBA 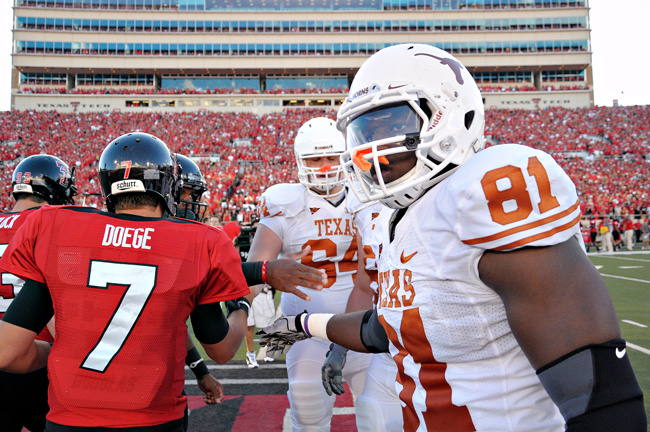 When Sam Acho graduated from McCombs School of Business Honors Program in 2010, he had a long list of accolades on his résumé.

But Acho, now a pass rusher for the Chicago Bears, had more than GPA points and internship experience.

“Sam defines champion in every way — on the field and off the field,” former Texas head coach Mack Brown said. “He works as hard as anybody I’ve ever been around.”

As a student on the 40 Acres, Acho was charged with balancing the work necessary to be a starting defensive end for the Longhorn football team while undertaking an honors course load. But he met the challenge head on.

Acho won the William V. Cambell Trophy, known as the “academic Heisman,” and played well enough for the Arizona Cardinals to take him with a fourth-round pick in the 2011 NFL draft.

Acho, who is quick to share the credit, said he recognized that he could not have succeeded at Texas without the help of others.

“The first thing I say is I had some good mentors,” Acho said. “I remember there was a professor in the business school named Herb Miller — he taught marketing. We would meet up once every couple weeks … and try and make sure that it was all being balanced.”

In addition to dishing out life advice, Miller guided Acho in an independent study that culminated in a 35–40-page research paper on how to build and maintain your brand as an athlete. Miller said Acho has all the right attributes to be a good leader.

“I think he’d be a great chief executive for a company,” Miller said. “He will be and is already a great ambassador for the University of Texas and the McCombs School of Business.”

Most NFL players in Acho’s position might relish the chance to be done with school and focus on football — but not Acho. After one offseason of relaxing, he enrolled in the Arizona-based Thunderbird School of Global Management, which has been a constant fixture in the top three of the U.S. News and World Report international business program rankings.

Acho is on track to graduate with an MBA in August, but his first offseason as a free agent complicated the path to graduation. Acho was put in the uncertainty of where he would play next, which led to significant emotional strain on him.

“One recommendation I have to anybody who wants to really test the limits emotionally, physically, whatever … test free agency,” Acho said. “You really find out a lot about yourself.”

Acho was relieved when Bears coach John Fox called with a contract offer earlier this month, but the move north and the beginning of offseason workouts complicated his plan to take classes in Arizona.

“There’s a couple weeks overlap,” Acho said. “What I decided to do to counter that is a lot of the assignments we had to do — I did a lot of those early.”

The balancing act that began at Texas will not end when Acho receives his degree. The former Longhorn still participates in his family’s annual summer medical mission trip to Nigeria and is currently in the process of raising $2 million for the construction of a hospital there.

There is also a new challenge waiting for Acho at home.

“I’ve been married for about a year; I have a four-month-old son, so I think this offseason might be just spending time with them,” Acho said.