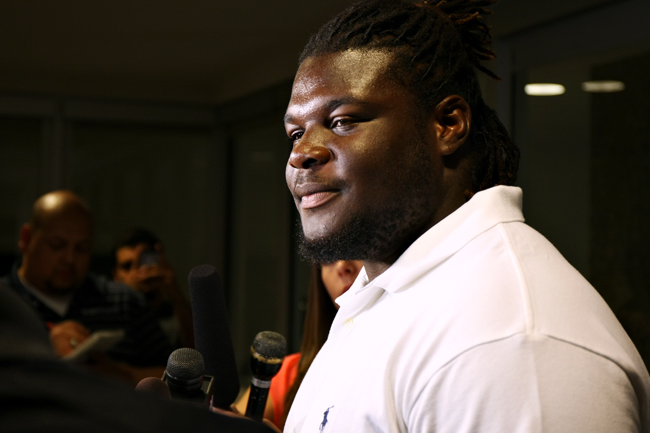 It took every ounce of patience Malcom Brown had — but by the end of the night, the former Texas defensive tackle had finally been drafted.

“It was just a great feeling,” said Brown, who was eating barbecue when he got the call. “Your heart starts pounding real fast; you just got to take a deep breath.”

With the last pick of the first round of the 2015 NFL Draft, the New England Patriots drafted the former Longhorn, making him the No. 32 pick overall. Brown, who had been predicted to be a top pick in the draft’s first round, said he started to feel a sense of disappointment as pick after pick went by without his name being called.

“[My emotions were] a little bit here and there,” Brown said. “I really thought I was going to be a real high draft pick.”

The Patriots lost a significant number of defensive players during the offseason, including defensive tackle Vince Wilfork, leaving a hole in the team’s defensive line. Brown said he would not let his late selection cast a shadow on his
new opportunity.

Brown is the first Longhorn drafted since the Arizona Cardinals drafted defensive end Alex Okafor in the fourth round of the 2013 NFL Draft. No player from Texas was drafted last year.

Brown played three seasons at Texas and was a two-year starter on the defensive line. He emerged as one of the best defensive tackles in the nation during his junior campaign at Texas.

“This is a good player,” ESPN analyst Jon Gruden said. “He can shed, get off blocks and make tackles … and he has some pass rush.”

As a backup in his freshman year, Brown didn’t have much of an impact on the defensive end. But he improved in the following years, starting all 13 games in his final season, and was recognized as a consensus first team All-American.

“Production over the last three years improved every year in the program,” ESPN analyst Mel Kiper Jr. said. “I thought he was the 12th best player in this draft.”

Draft experts predicted Brown would be drafted by the Detroit Lions, who had the 23rd overall pick, but, instead, he will be headed to the defending Super Bowl champions and to a team that has been to seven Super Bowls since 2001.

“He’ll be a success because of his work ethic,” head coach Charlie Strong said in a statement. “He works hard and comes to work each and every day. It doesn’t matter who he’s going against; he’s always looking to get better.”

Brown said he doesn’t feel any added pressure, despite heading to the Patriots.

“I’m just going to go in there and contribute whatever I have to give,” Brown said.