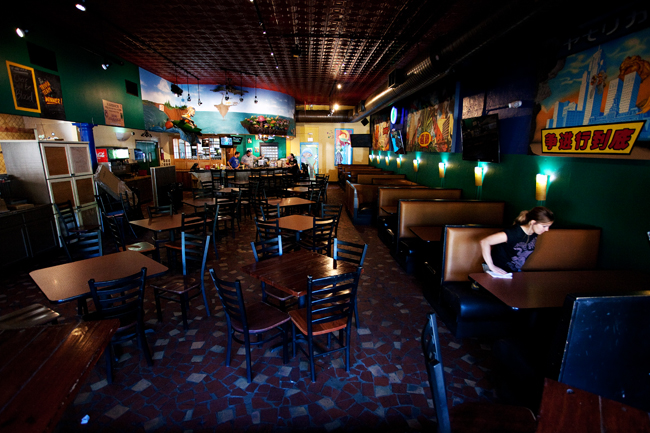 Correction: An earlier version of this article incorrectly stated that Mellow Mushroom opened on the Drag in 1974. It has since been updated.

Shortly after the chef rolled the final ball of dough into a pizza, Mellow Mushroom on Guadalupe Street closed its doors for the last time.

Kitchen manager David Torres, who formally confirmed the closing, said the restaurant would shut down permanently as soon as it had sold the last pizza.

“Starting in March, we will begin a renovation where we will add two restaurants, a larger selling space and some other great features,” said Andy Schmidt, Urban Outfitters store merchandiser, in a February interview with The Daily Texan. “We hope to be 100 percent complete with the additions by fall.”

French sophomore Rena Moreno and chemistry sophomore Richard Schroer commemorated the pizza restaurant’s closure by having a date at the location for the last time.

Schroer said he would miss the restaurant’s quirky atmosphere after it closed.

“I don’t know if there is another pizza place like this one anywhere nearby, which is kind of sad,” Schroer said. “It’s definitely different from all the other pizza places here.”

Moreno said she was originally surprised by the restaurant’s unconventional pizza toppings, but later came to enjoy them.

“My first time here I remember thinking, ‘I don’t know how that’s going to be on a pizza,’ and then I really enjoyed it, and it kind of opened me up to trying new things,” Moreno said. “Before we came here, I was probably one of the pickiest eaters ever, but, three years later, we’re still coming here, and now it’s the last day.”

“Some of the best memories I’ve had from here is coming here with my college friends and getting large pizzas and sharing them together,” McCuller said. “This place just seems like something that really belongs in Austin. I’ll just miss it for that.”