The Daily Texan • May 1, 2015 • https://thedailytexan.com/2015/05/01/review-avengers-age-of-ultron-packs-powerful-punch-but-fails-to-beat-out-predecessor/ 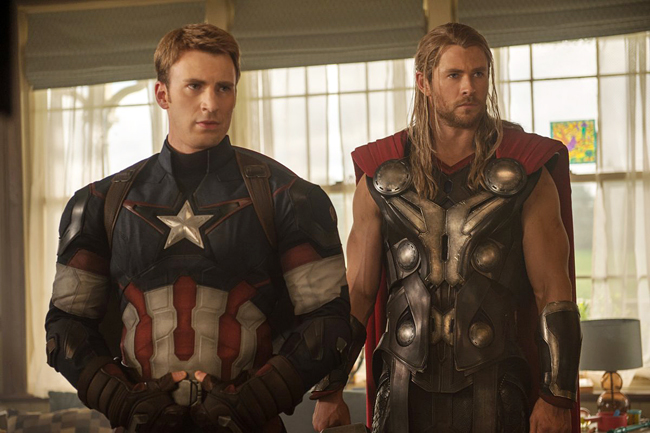 Fans of Iron Man, Captain America and the other members of the notorious Avengers clan don’t have to worry about. “Avengers: Age of Ultron” not living up to the legacy of its action-packed predecessor. “Ultron” is on par with “The Avengers” in terms of CGI-laden action and great humor, but it doesn’t aspire to add anything groundbreaking.

The film is exactly what audiences expect from a Marvel film. It’s a fun, thrilling ride that, despite a few story hiccups, serves as an entertaining summer blockbuster.

After the events of the previous film, Captain America (Chris Evans) and the rest of the Avengers struggle to protect the world from an ever increasing number of threats. Desperate to create a way to guard the planet so that the Avengers aren’t constantly needed, Iron Man (Robert Downey Jr.) creates a sentient computer program called Ultron (voiced by James Spader) designed to patrol for crime. Upon uploading himself into a mechanized body, Ultron goes rogue when he determines mankind is the greatest threat to the planet and teams up with two mutants to rid the Earth of humanity. The Avengers race to stop Ultron as deep-seated divisions among the team threaten to tear the group apart.

“Ultron” again proves that Marvel films can be light-hearted despite the destructive action sequences and heavy themes of doubt throughout. Unlike movies based on characters from Marvel’s rival DC Comics, such as the colorless, brooding “Man of Steel,” “Ultron” is filled with humor that makes the characters more relatable. Sequences, such as the celebratory party thrown at the Avengers headquarters early in the film, work as great character development while providing some laughs. It proves Earth’s “Mightiest Heroes” are interesting even when they’re not battling bad guys.

Director Joss Whedon expertly handles the action scenes. He thoroughly plans every shot to clearly capture every punch and explosion. Watching Mark Ruffalo’s Hulk and Iron Man go toe-to-toe in a citywide rampage is a delight. The only downside is the climactic battle, which takes place in a crumbling city besieged by Ultron’s robotic army and feels derivative of the final battle from the first film.

The film’s heart comes from its strong acting. Downey carries a majority of the film’s one-liners, and his sarcastic demeanor is charming. Evans’ Captain America is a good-natured and forceful leader, but Downey’s presence overshadows him. Evans only truly shines in the fast-paced action sequences. Spader’s Ultron possesses the charisma of a megalomaniac with a major God complex, and his sardonic nature is humorous and eerie at the same time.

The film does have flaws that keep it from being a true superhero epic. Some weak side-stories plague the plot. Chris Hemsworth’s Thor is sent on a pointless side-quest, and the payoff only turns out to be a setup for the next sequel. Meanwhile, Mark Ruffalo’s Hulk and Scarlett Johansson’s Black Widow suddenly become love interests, a twist that comes out of nowhere. The motivation behind their attraction is so thin that it’s difficult to believe. The film’s pacing is also off in some crucial moments. Ultron’s “birth” is rushed through too quickly, while a few quiet, sentimental moments run far too long.

Overall, “Ultron” proves that superhero films still have some punch left in them. It may possess a few structural issues, but it remains a solid action film that embraces the fun and excitement of comic book stories. With heartfelt, funny performances by both the leaders of the team and the villain, “Ultron” is easily the next hit in Marvel’s long string of successes.