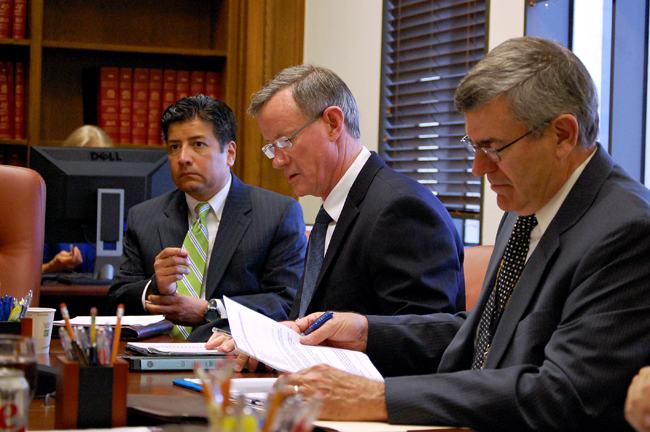 Updated (3:34 p.m.): In a brief submitted on behalf of Chancellor William McRaven and the UT System Board of Regents, lawyers for the System asked the Attorney General to dismiss Regent Wallace Hall’s request for advice on Hall's disputed right to request thousands of admissions-related documents.

The nine-page brief comes after a two-hour meeting this morning when the Regents met with the Chancellor and the System’s legal advisers to determine their position on Hall’s request.

In the brief, Daniel Sharphorn, vice chancellor and general counsel for the UT System, and Francie Frederick, general counsel to the Board, argue that Hall did not have standing to seek formal advice from AG Ken Paxton in the first place.

Even if Paxton did agree to provide Hall advice, Hall’s requests for thousands of documents used in the admissions investigation should still be denied, they wrote.

“A Regent’s access to information is not ‘unfettered,’” Sharphorn and Frederick wrote. “Given the potential volume of a request for information by an individual member of the Board and the impact on workload priorities, it is inherently reasonable that the Regents’ Rules provide checks and balances.”

To read the full brief from Sharphorn and Frederick, scroll to the bottom of the story.

Original story: After more than two hours in executive session, the UT System Board of Regents voted to file a brief with the Texas Attorney General’s Office relating to Regent Wallace Hall's search for documents about UT-Austin admissions. UT System Chancellor William McRaven said the brief will be filed later today but declined to elaborate on its contents.

Although the brief will address Hall’s appeal to Attorney General Ken Paxton for assistance in obtaining access to thousands of documents Kroll Associates, Inc. used in its independent investigation of UT-Austin admissions practices, board members also declined to address what the brief’s specific focus will be. The board voted to file the brief by a unanimous vote of eight, with Hall abstaining.

After the board reconvened in open session, Regent Alex Cranberg indicated the System brief will likely outline reasons Hall should not be granted the documents.

“I certainly feel it’s very important to express the need for individual regents to have [the] capacity to ask hard questions, even as the majority of the board might feel uncomfortable, but I don’t think this response suggests that the regents don’t have that capacity,” Cranberg said. “[I believe the response suggests] merely that there might be some limits placed on what a regent might reasonably ask for.”

Cranberg also alluded to concerns that some of the documents Hall is requesting might contain personal student information, protected under federal privacy laws.

“If anyone is asking, in effect, for the System to violate federal law, that should not be allowed to occur,” Cranberg said.

Hall began asking for this round of documents in early March, after the Kroll investigation concluded that President William Powers Jr. had exerted influence in the admissions of a handful of students but had not technically broken any rules. The investigation found that administrators at the University and within the UT System held “wildly divergent” attitudes about whether considering relationships between the University and high-ranking officials is an appropriate factor in the holistic review process.

After the results of the investigation were released, McRaven declined to take punitive action, although he said he would like to see admissions policies clarified going forward.

“There are a lot of thing we could do better, but, at the end of the day, no willful misconduct [occurred], and I found no criminal activity, and, therefore, I intend to take no disciplinary action,” McRaven said in February.

When Hall asked for the documents Kroll had used in the investigation, three regents, including Hall himself, voted to allow him access. Under Regent Rule 19801, “Policy on Transparency, Accountability, and Access to Information,” UT System employees must respond to information requests “without undue delay” if two or more regents vote in support of the request.

However, McRaven said Hall’s request fell under the category of “inquiry and investigation,” invoking another policy that would require a majority board vote for approval.

“I have no concerns about giving you information that is consistent with your regental needs to be better informed, i.e. how the admissions process works … that is what the board approved,” McRaven told Hall in a terse email exchange in April. “However, your twelve requests for information lead any reader to believe that you are further investigating the Kroll report, the Fisher litigation, Legislative compliance, all of which are perfectly acceptable for a board, if procedurally the majority of the board wants to undertake these new inquiries…If it is [a new inquiry], I have no problem with that, as long as the majority of the board approves.”

Hall responded by having his lawyer, Bill Aleshire, ask Paxton to address whether the board or the chancellor have the legal authority to prohibit regents from having access to copies of records they believes are necessary to fulfill regential duties.

“Regent Wallace Hall has concerns about corrupted processes at the University of Texas at Austin, most recently regarding student admissions practices,” Aleshire wrote to Paxton. “Other opinions of the Attorney General also demonstrate that a regent’s inherent right of access to [records] is not subject to the judgement of other board members (or of the Chancellor) as to whether they think the regent ‘needs’ that information.”