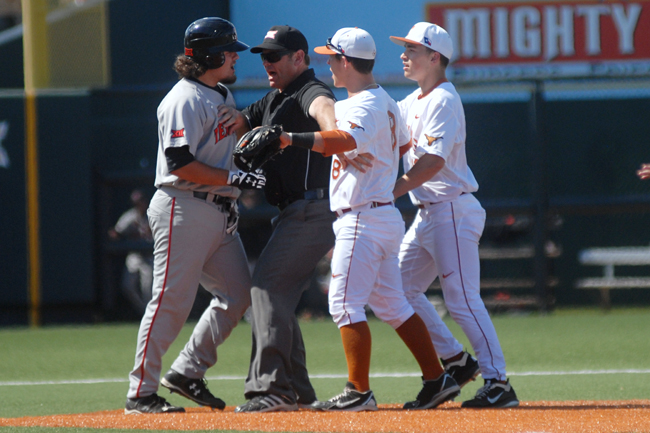 Late in the ninth inning Sunday, Texas Tech sophomore Stephen Smith slid hard into freshman shortstop Joe Baker. As the two barked at each other, the Texas bench ran on to the field in a rare sign of emotion for the Longhorns.

“It’s just baseball,” sophomore catcher Tres Barrera said. “We’re just sticking up for our teammate. We saw a guy went in hard. You just got to back up your guy at all times, no matter what the score is.”

The move, about protection, was equally the result of raw emotion spilling onto the field as the Texas season hung in the balance. In a must-win game, Texas faltered to Texas Tech, 5–1, in a decisive series finale, just as it has done most of this season. The Red Raiders took the series with a 2-1 advantage.

“It’s like going to the same movie over and over again,” head coach Augie Garrido said. “We continue not to take quality at-bats with runners in scoring position. When we have opportunities to score runs, we fail offensively to take our walks and sustain the rally that we need.”

Garrido said the team entered the weekend with the hope of sneaking into the NCAA Tournament. But the Longhorns flew off the radar in front of 6,284 faithful fans Sunday as a two-run home run by Texas Tech freshman shortstop Orlando Garcia sailed over the left-field wall in the fifth inning.

Despite recording eight hits, the Longhorns failed to produce any run-scoring drives as their only run came across on a walk. Texas played 24 innings of scoreless baseball over the weekend. It plated three runs in the fifth inning of Friday’s 3–0 win and one run in each of its losses.

“We haven’t capitalized when we needed to,” Barrera said. “We haven’t been able to put timely at-bats and timely hitting when we have runners in scoring position. That’s just the way it’s been.”

Texas has a .500 record and has failed to win back-to-back Big 12 games since late March. The team also dropped three mid-week games this season against UT-Arlington, Texas A&M–Corpus Christi and Sam Houston State. The Longhorns’ struggles started in early March when the team dropped a doubleheader against San Diego.

“We had a lot of success, a lot of fight and a lot of expectations,” Garrido said. “I think when we lost the first three-game weekend, we started to feel differently about their ability to come back and win the game. We’ve had problem with RBIs.”

The Longhorns offense started off hot but quelled as the season grew. Texas put plenty of runners on base — as it did against the Red Raiders — but failed to bring home many runs. The biggest issue that hurt the Longhorns was their focus on their batting average, Garrido said.

“We became one dimensional; we only had one goal,” Garrido said. “Anybody who’s been around baseball for a long time … they know that the biggest demon of all the ones that are around is batting average.”

With four games left in the regular season, the team’s postseason hopes likely ride on winning the Big 12 Championship, a shock considering Garrido called this team as good as the 2005 national championship team earlier this season.

Despite all the negativity surrounding this season, the players still believe a comeback is possible, according to freshman pitcher Connor Mayes.

“[The batters] are staying with it and going through the process that coach talks about, and that’s all we can do,” Mayes said. “We might be unlucky, but we just got to stay with it.”