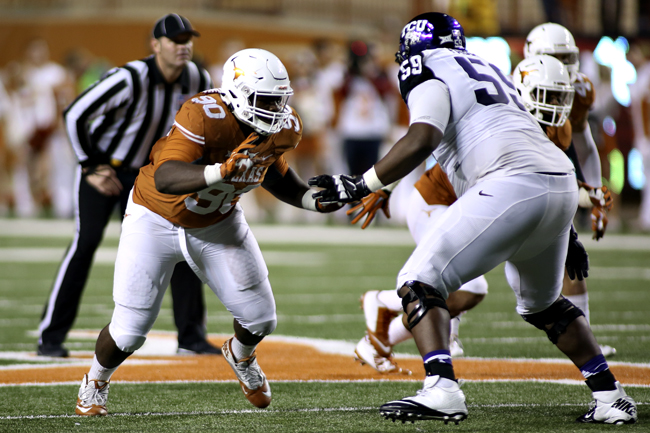 After seven rounds and 256 selections in the 2014 NFL draft, Texas had no names on the selection board.

But by the time Mr. Irrelevant — the name given to the last player drafted — was picked in the 2015 NFL draft, Texas had made its presence felt.

Five Longhorns, the most since 2010, were selected in this year’s draft, which was hosted in Chicago over the weekend. The Longhorns first got on the board Friday, when the New England Patriots drafted defensive end Malcom Brown No. 32 overall, and the team’s involvement ended when the Dallas Cowboys selecting tight end Geoff Swaim with the 29th pick of the seventh round.

“It was just a relief — the past four or five hours have been pretty intense,” said Swaim, who will be joining former Texas teammates Donald Hawkins and Chris Whaley, in a statement. “It’ll be cool to play with the guys that I’ve known and have a relationship with.”

Defensive backs Mykkele Thompson and Quandre Diggs were taken in the fifth and sixth rounds, respectively, of the NFL draft. The New York Giants selected Thompson with the eighth pick in the fifth round, while the Detroit Lions picked Diggs with the 24th pick of the sixth round.

“It’s great,” Diggs said of being drafted on the same day as Thompson, who is one of his closest friends. “Mykkele’s my brother; that’s my best friend. He’s one of the people who definitely pushed me.”

Another person who pushed Diggs was head coach Charlie Strong, whom Diggs developed a close relationship with in Strong’s inaugural season at Texas.

“He can cover and may not have top-end speed, but he makes up for it with his intelligence,” Strong said. “He plays within himself, studies receivers, studies splits [and] studies everything the offense does.”

The Philadelphia Eagles selected linebacker Jordan Hicks with the 20th pick in the third round.

“I’ve been talking to [Philadelphia] for a while, actually,” Hicks said in a statement. “I went on a pre-draft visit there and had a great time, felt really comfortable and enjoyed meeting with all the coaches and getting a feel for the place.”

Four other Longhorns found teams in the NFL after the draft ended. Once the draft is over, players have the chance to sign with teams as rookie free agents.

Wide receiver John Harris will be joining Hicks after signing a free agent deal with the Eagles, while long snapper Nate Boyer signed as a free agent with the Seattle Seahawks. The St. Louis Rams picked up running back Malcolm Brown, and defensive end Cedric Reed signed with the Buffalo Bills.

“It was great,” Boyer said. “[Seahawks] coach [Pete] Carroll called me, actually. He called and said, ‘I want to invite you out to training camp,’ and he actually said, ‘I hope you accept my invitation.’ Obviously, ‘yes’ was the answer to that.”

Before playing at Texas, Boyer was a member of the Green Berets. He joined the team in 2012 with no prior football experience.

“The thing about Nate is he’s such a hard worker,” Strong said. “Any time someone represents your country, when you talk about courage, you talk about honor, that’s what it’s all about. I love him so much.”

By the end of the weekend, the Longhorns had nine players headed to the NFL — a distinct turnaround from last year.