The Daily Texan • May 5, 2015 • https://thedailytexan.com/2015/05/05/kerbey-lane-celebrates-35th-anniversary-with-festivities-donations-to-united-way/ 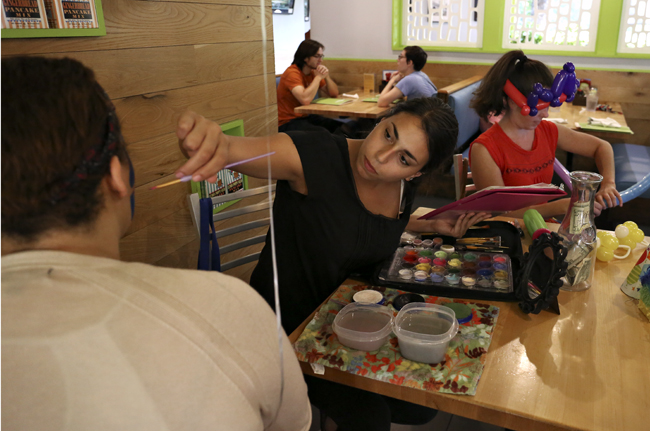 Kerbey Lane Cafe celebrated its 35th year anniversary Monday with face painting and miniature horses — donating all of the proceeds to United Way for Greater Austin.

“We wouldn’t be around today if it weren’t for the countless Austinites who have dined with us and supported our business for all these years,” Ayer said in a statement. “We deeply value our community and want to celebrate this milestone by giving back. United Way for Greater Austin is a first-rate organization that truly practices its motto of making Austin great every single day.”

United Way for Greater Austin is an organization that has financially supported local charity groups since 1924.

Sarah Karney, the marketing and communications coordinator for United Way for Greater Austin, said the organization has a dual mission to give everyone in the Austin community the opportunity to be a philanthropist and to work with families to overcome barriers to economic opportunities.

United Way runs programs in the areas of early childhood education, high school dropout prevention and financial stability, according to Karney. It also funds other nonprofits in Austin that do work in these areas.

“Kerbey Lane Cafe is donating 100 percent of net profits from six locations to us,” Karney said. “That money will then be reinvested in the Austin community in a number of ways to be determined by KLC and our Resource Development team.”

Kerbey Lane has six locations, exclusively in the Austin area, four of which are open 24/7. The first restaurant was established in a house on Kerbey Lane, the restaurant’s namesake.

In addition to the festivities, the restaurant concluded their “35 Days until 35” social media promotion, during which participants were presented with the opportunity to win T-shirts and pancake mix.

Kerbey Lane’s success can be attributed to their food’s consistent quality and their attention to customers, according to Chris Wills, a manager at Kerbey Lane Cafe on Guadalupe Street.

“We always do what we can to ‘wow’ the guest. Customer service is a big deal for us, and we’re always open to feedback,” Wills said. “I think that’s one of the reasons people like us. Customers can voice their opinion.”

The UT community would not be the same without Kerbey Lane Cafe, advertising junior Rachel Murchison said.