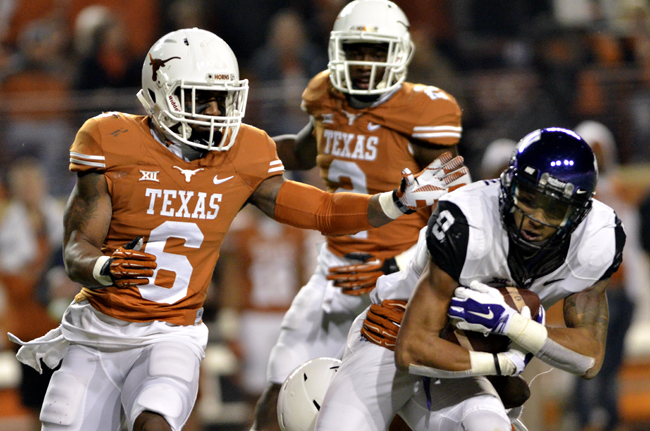 Friday marks the final day of classes for those who are graduating in just a few weeks. Since arriving on the 40 Acres as freshmen in August 2011, the Class of 2015 has seen mixed results for Texas Athletics.

Through it all, there were some triumphs but plenty of struggles. Here are some numbers, dates and stats that define the Class of 2015’s time at the University of Texas.

169: Losses by the major three men’s sports. Baseball, football and basketball have amassed 169 combined losses over the past four seasons, the most since the 171 total losses endured by the class of 2001. If the baseball team drops five more games, the Class of 2015 will be the
losingest senior class in school history.

58.33%: Men’s basketball’s winning percentage. Texas has had its lowest win percentage over a four-season span since it only won 58.08 percent of its games from 1995–1999. Texas’ 57 losses over this time were the most the program had recorded in four seasons since the Longhorns dropped 63 games from 1983–1987.

2004: The last time the women’s basketball team advanced to the NCAA Tournament’s second weekend until this year. The No. 5-seeded Texas women knocked off No. 4-seeded Cal 73–70 in Berkeley to advance to the Sweet 16, but the Longhorns fell to the eventual champion, No. 1-seeded Connecticut Huskies, 105–54 in the Sweet 16. This was the first time making it that far since 2004.

58.26%: Baseball’s winning percentage. Texas had its lowest winning percentage since winning 57.09 percent of its games from 1998–2001. Barring winning the Phillips 66 Big 12 Championship in Tulsa, Oklahoma, Texas baseball will miss the NCAA Tournament for the third time in the Class of 2015’s four seasons
in Austin.

2013: The year softball finished the season ranked No. 3 in the country. The No. 3 ranking in 2013 was Texas’ best final ranking in program history. This also marked the team’s first appearance in the Women’s College World Series since 2006.

4: Big 12 Conference titles for volleyball. The Longhorns went 61–3 in conference play and did not lose more than one conference match in a season.

0: The number of double-digit win seasons by football, single-digit loss seasons by men’s basketball or 50 plus-win seasons by baseball. The last University of Texas class to witness none of the three feats while enrolled in school was the class of 1969.