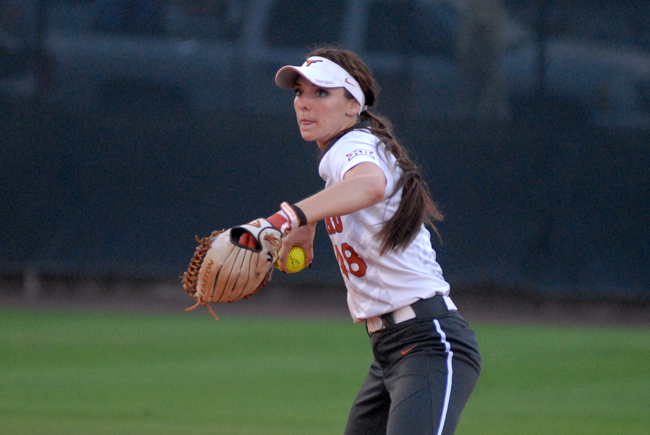 The Longhorns are heading to Waco to kick off their final series of the season against the No. 16 Baylor Bears. The first game of the series will be on the road, and the final two will be played at home over the weekend.

Ceo earned Big 12 Player of the Week honors Tuesday following her performance against Oklahoma State. She went 4-for-8 with a .500 batting average through the weekend, acquiring six RBI while blasting two home runs, one of which was her first career grand slam.

The sweep pushed Texas’ road win count to a program-best 13 games, and this is important for the Longhorns as they play their final road contest of the season Wednesday night.

“Whenever you go into an opponent’s home, there’s a little more of a challenge and a little bit different energy,” Ceo said. “We’re going in focusing on the little things that are going to help us achieve our ultimate goal.”

With Baylor’s pitching staff ranked second in the conference, boasting a team ERA of 2.44 and an ace in junior pitcher Heather Stearns, who leads the Big 12 in strikeouts with 208 through 167 innings pitched, Texas’ hitters will have to make adjustments to find success.

“We’re seeing what their pitchers throw a lot of and adjusting accordingly, making their strengths our strengths, so we can battle properly,” junior catcher Erin Shireman said.

One of Texas’ biggest strengths is its pitching staff, which has improved steadily throughout the season, Clark said.

Baylor has a team batting average of .324, the second best in the conference, and a couple of big hitters in sophomore infielder Ari Hawkins (.422 batting average) and freshman infielder Shelby Friudenberg (16 home runs), so the Longhorn hurlers will need their best stuff on hand this weekend. However, with a defense that Ceo calls relentless behind them, Texas’ pitchers don’t need to carry the load on their own.

“We have this mindset on defense that whenever a ball is put in play, we will make the stop,” Ceo said. “Our pitchers knowing that they have a defense behind them that will put its all into every play makes them more confident.”

After Wednesday’s game, which will be broadcast nationally on ESPN2 at 7 p.m., the series will move to Austin on Saturday and conclude Sunday. It will be a good test for the Longhorns as they prepare for the postseason, Clark said.

“You have to take care of your opportunities when you have them,” Clark said. “As the season goes on, every win counts.”