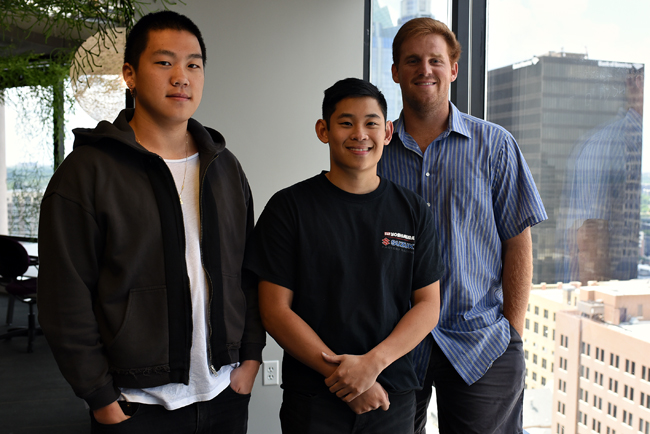 What do you get when you combine tech-savvy roommates, a couple hundred cans of energy drinks and a semester’s worth of coding? Ping Social — an app aimed to make social events more accessible to users.

Will Ko, computer science and math senior, and Winston Tri, mechanical engineering and management information systems senior, co-founded the app, which is designed to streamline the way users organize social events. Ping Social allows users to see which events are happening around them and organize their plans more efficiently to avoid FOMO, or the fear of missing out. Since its launch in mid-April, the app has garnered more than 1,000 users.

Tri said users who want to get coffee or play a game of pick-up soccer can post an event through the app inviting either friends or the public. The user can add an event name, a time and a brief description of the event. Friends can see a guest list of who is going to the event and view a map to determine the event’s proximity. The users can then decide whether they want to join the event.

“Instead of just asking around, you can create a ping, and anyone you’re friends with on the app can see it,” Tri said. “It empowers the user to take that step and make the decision for all of his or her friends.”

Tri said Ping Social is ideal for situations in which a text message would be too personal, but a Facebook invite would be too impersonal.

“You have people who you like, but you’re not necessarily the best of friends with, but you would enjoy hanging out with them,” Tri said. “This app bridges that gap.”

Communications senior Wes Cole, the marketing director for Ping Social, said the team wanted to create something it could use that would benefit other people as well.

“I get annoyed at myself sitting at home when I should be hanging out with my friends,” Cole said. “College is the one time you get to have more social interaction than any time in your life, so Ping was our solution for that.”

The app’s logo, a hot air balloon, is based off the group’s desire to emphasize Ping Social’s focus on locality. Ko said a hot air balloon, something that can be seen within a certain area, is similar to the app, which displays events within a 25-mile radius.

Ko said the knowledge that people are fostering relationships through Ping Social is really rewarding.

“One of my roommates had gotten back from having margaritas with friends he knew but wasn’t close with,” Ko said. “Because of Ping, he had a really great time.”

The group currently works from the Capital Factory technology incubator in Austin. They plan to spend the summer marketing the app to gain more users for the coming fall. Cole said he hopes the app can give users the memories and experiences he’s had in college.

“I value the time I spend at UT and the relationships I’ve built so much more than the classes and the grades,” Cole said. “I learned and benefited much more from the interactions I’ve had with all the awesome people here, and that’s where the passion for the app comes from, and why we continue to spread it.”