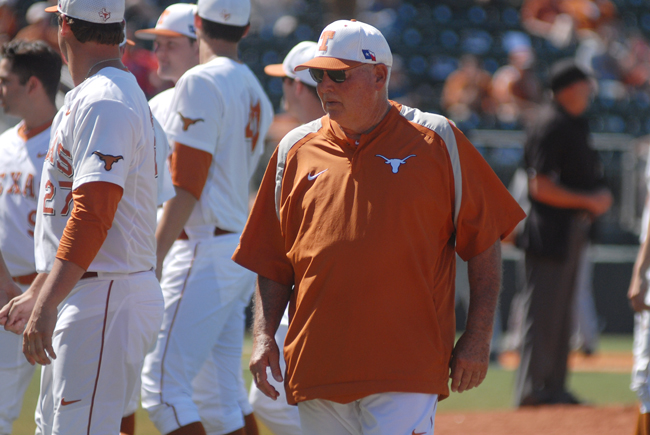 Texas’ final home game this season, against Texas State, was cancelled for inclement weather, meaning the Longhorns have three guaranteed games left and a murky offseason looming on the horizon.

The Longhorns will travel to Waco to take on Baylor in their regular season series finale May 16–17, and Texas hopes it plays well enough to bolster its faltering chance of getting into the Big 12 Tournament.

If the Longhorns, who are 9–12 in Big 12 play and fifth in the conference, want to make a surprise appearance in the NCAA Tournament, the team will likely have to shock the conference and win the Big 12 Championship. That possibility is unlikely, as the Longhorns have dropped 10 games to the conference’s top four teams — TCU, Oklahoma State, Oklahoma and Texas Tech.

Despite the long odds, junior left fielder Ben Johnson and the players aren’t ready to give up yet.

If the team doesn’t make the NCAA Tournament, it will be the third time in four years that the team has failed to advance to the postseason.

The fan base has grown tired of losing, leading to unsubstantiated rumors about Garrido’s future spread primarily on message boards. One Austin American-Statesman columnist called for Garrido to resign.

But Garrido shows no signs of quitting. Although this season has been subpar, Garrido said he feels like he can right the ship.

“I know how to fix it,” Garrido said. “But it has to start like it did last year in the fall. We really assumed and thought we had the leadership on this team as a result of how close they were and how many guys were coming back. … We didn’t work them as hard on attitude as we did with last year’s team. It’s all about attitude.”

As the offseason approaches, Johnson and junior shortstop C.J Hinojosa will have to decide whether to enter the MLB draft or return for their senior seasons. The Longhorns are already losing several starting seniors, including pitcher Parker French, second baseman Brooks Marlow and right fielder Collin Shaw.

In the face of offseason drama, Texas still has baseball to play — and the team will try, despite the odds, to make a run at the NCAA Tournament.

“We gotta comeback ready to play,” sophomore catcher Tres Barrera said. “Come back with an opening-day mindset and just fight it. We have a bunch of fighters in this locker room. We have everybody back from last year’s team, and we know what it takes to be in the College World Series.”