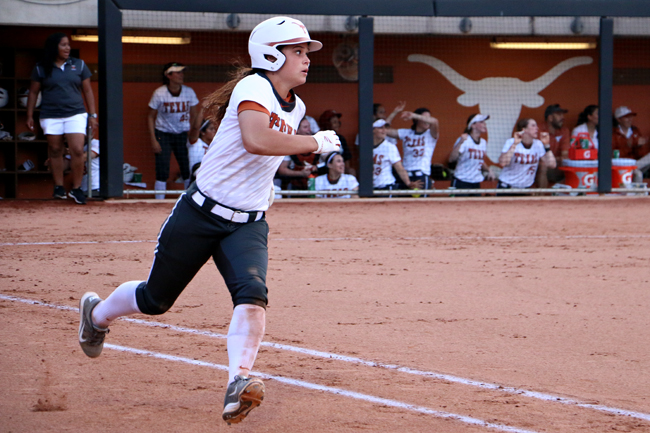 Texas got shut out for only the fifth time this season, falling to Baylor, 5–0, on Wednesday night in the opener of a three-game split series.

After an all-around impressive performance this past weekend, Texas (35–15, 10–6 Big 12) struggled to find a rhythm against No. 16 Baylor (38–13, 12–4 Big 12) in Waco. The Longhorns could not manage to shake junior pitcher Heather Stearns as they drew just two walks and hit one ball off her over the span of seven innings.

Before tonight, freshman pitcher Erica Wright had won five straight pitching decisions for Texas since her last loss on April 11 against Oklahoma. In that stretch, she recorded an impressive 1.34 ERA, two complete-game shutouts and 48 strikeouts over 31.1 innings.

But on this night, Wright allowed eight hits and five runs over six innings while accepting the loss.

“It’s just awesome to be able to pitch and play with people who are so good,” Wright said. “They’re all so talented.”

After a leadoff double in the second, an infield single put the Bears on the scoreboard. The next inning, sophomore shortstop Devon Tunning hit a triple for the Longhorns, sparking a potential Texas run. But by the end of the inning, she was stranded just 60 feet from home plate.

As the fourth inning progressed, the Bears put a pair on base. With two on and no outs, Wright stood on the mound and faced the looming attack. In such a squeeze, she prompted a fly-out to right, incited a pop-up to short and caught junior catcher Robin Landrith looking to get out of the inning unharmed.

“She wants the ball in her hands at the biggest moments, and quite honestly, that’s something you can’t teach,” head coach Connie Clark said.

The Baylor lead stayed at one through four innings, but the Longhorns could not even muster another hit.

In the bottom of the fifth inning, the Bears broke the door open as they increased command of the board. With bases loaded, junior outfielder Linsey Hays picked her pitch and sent one down the right-field line for a two-RBI double. The next play, the Bears extended their lead to four and grabbed one more the next inning.

In the Longhorns’ last chance in the top of the seventh, three came up and three went down.

“It’s great knowing they are all going to get the job done, and if not, they are going to do their best,” Wright said.

The Longhorns will next play the Bears at Red and Charline McCombs Field at 6:30 p.m. Saturday before wrapping up the series Sunday. Both games will be aired on Longhorn Network.