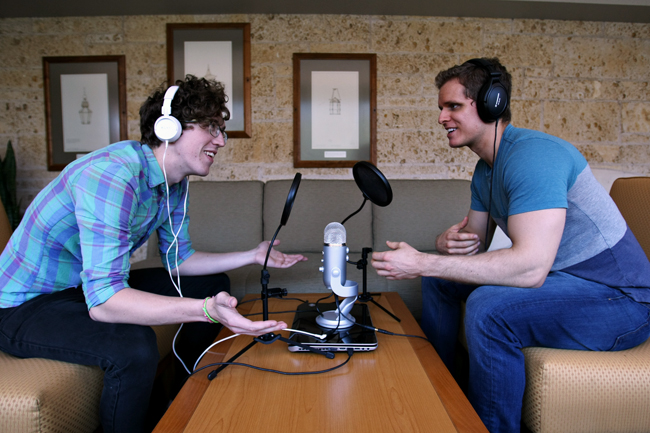 Space exploration and high seas adventures are common topics of conversation between UT alumni Patrick Creamer and Quinn Buckner. Once a week, they set up their microphones and record random stories for their podcast, Now You Know A Little Bit More About Us.

“It’s an outlet for us to express our friendship and funny ideas that come to mind,” Buckner said. “We’re also producing content that people find enjoyable, and that’s always fun to do — to bring joy to someone.”

Self-proclaimed “fast friends,” Creamer and Buckner met at an improvisation show in 2013. After Creamer invited Buckner to be on his podcast Thirsty Pizza, their on-air chemistry encouraged them to make a new podcast in October 2014.

The two typically get together in one of their apartments to record the roughly 45-minute-long shows, which is available on iTunes and podcast-hosting sites, such as Stitcher and Libsyn. They write down a few talking points before the show, but, once the mics turn on, they let the conversation go wherever it may lead. After chatting for a bit, they improvise a story about cop chases, battling a worldwide flood or anything in between. They round out the show with some freestyle rapping.

As improvisers in Austin, the two are used to transforming random ideas into full-blown stories.

“It’s very freeing just having a chance to get up on stage or in a room with some people and mess around,” Creamer said. “It’s like being back in kindergarten trying to keep a balloon up in the air with a group of people. It’s fun that you feel like you’re not allowed to have anymore.”

The two first got into the improvising scene when they joined Gigglepants, a UT student improv group. When Buckner, who graduated in 2011, isn’t working as a software engineer downtown, he teaches improv classes and performs at Austin’s Hideout Theatre.

Creamer, who graduated in 2014, started performing stand-up comedy and improv shows in Austin in college and continues to perform today. Now an engineer at Chatsworth Products, Creamer said being an improviser and creating the podcast help balance out his technical life.

“Mechanical engineering is a lot of problem solving, and it feels like improv and the podcast are chances to not worry so much,” Creamer said. “It adds some freedom to my life.”

Shannon Cloud, radio-television-film sophomore and Gigglepants member, said she first met Creamer her freshman year while auditioning for improv groups on campus and has taken classes at the Hideout Theater with Buckner. As a frequent listener, she said the podcast does not differ much from a typical conversation with the pair.

“It’s really fun, and they’re all over the place,” Cloud said. “I think what makes Patrick and Quinn great improvisers is that they heighten the thing that’s weird. They’re really good listeners, and they pair well together.”

The duo hasn’t known each other for very long, but Cloud said that’s what makes the podcast entertaining.

Since they began in October, Buckner and Creamer have created 13 podcast episodes. They said for future shows, they hope to get more fan involvement and have people recommend discussion topics.

“The main goal of this is to bring laughter to people and make them feel good in some capacity,” Buckner said. “It could be by making stupid jokes or making a story that is interesting — or making people laugh at how bad I am at freestyle [rapping].”