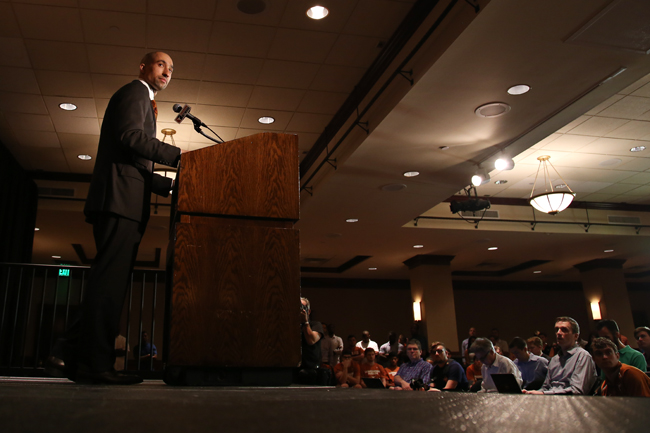 The 2014–2015 school year was a roller coaster year for Texas athletics. Fans saw shake-up at the top in men’s basketball, another national championship for men’s swimming and diving and another trip to the Final Four for volleyball. But those changes and successes were punctuated by disappointment — Texas football ended its season with two blowout losses, and baseball is on the verge of missing the NCAA Tournament yet again. Here are five of the top sports highlights from the past school year.

Barnes out, Smart in

Smart is the first African-American head basketball coach to be hired at Texas.

Smart will bring a “havoc” style of play, an up tempo defense and an offensive system that helped propel VCU to the Final Four in 2011. He has been to the NCAA Tournament every year since 2009.

Sophomore point guard Isaiah Taylor decided to return to Texas for his junior season, and may well serve as engine in Smart’s system next year.

The Longhorns dominated the pool at the NCAA Championships in March, winning the team’s 11th nation championship. Texas led the meet from the start and finished with 528 points. Second-place California ended with 399 points.

In addition to the team titles, the Longhorns also claimed seven individual titles. Sophomore Will Licon and freshman Joseph Schooling led the way for Texas, winning two events each.

Texas is now tied with Ohio State for the second-most national championships in swimming and diving.

The Longhorns returned to the Final Four in December largely on the strength of senior outside hitter Haley Eckerman. Eckerman finished the season with a team-high 44 aces and 3.24 kills per set in her final year.

The accomplishment was the third-straight trip to the national semifinal round for Texas — a feat only matched by the 1986–1988 team.

Still, the season ended in disappointment. Texas fell behind unseeded BYU 2–0 and couldn’t rebound, losing 3–1 in the national semifinal round. The Longhorns finished the year with a 27–3 record overall and a 15–1 Big 12 record.

Head coach Charlie Strong had an up-and-down season in his first year at the helm for the Longhorns. On the one hand, the defense was stout, finishing first in the conference in pass defense and total defense. Senior defensive tackle Malcom Brown had 11 tackles for loss and was selected by the New England Patriots in the first round of the NFL draft.

But the offense struggled with first-year starting quarterback Tyrone Swoopes and a revolving door along the offensive line.

Strong did finish the year on a positive note, locking down the No. 9 class for 2015 according to ESPN.

Baseball fails to live up to expectations

Before the season began, Texas head coach Augie Garrido said this season’s Longhorns would be just as good as the 2005 national champion winning team.

It was a bold statement, but a fair one — Texas was coming off a deep run in the College World Series and had just fallen a game short of playing for the national championship.

But after 48 games, the Longhorns have shown they have little in common with the ’05 team. Texas holds a .500 record, and, barring a run at the Big 12 championship, it will likely miss the NCAA Tournament for the third time in four years.

“We really assumed and thought we had the leadership on this team as a result of how close they were and how many guys were coming back,” Garrido said.

Unfortunately for Texas, Garrido assumed wrong, and the team failed to live up to its own expectations.