Longhorns bats come to life in series win at Baylor 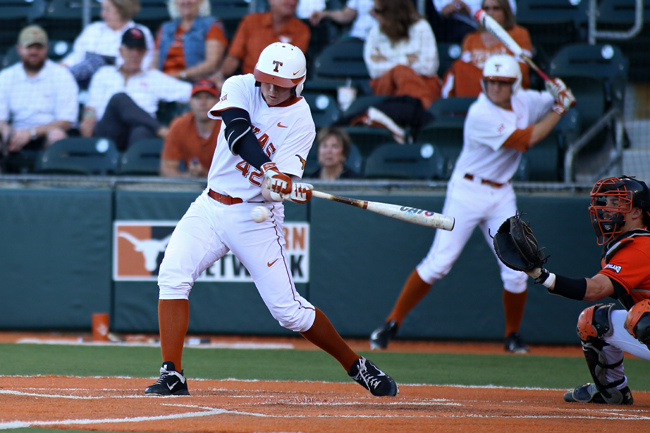 WACO — Since sweeping Kansas State in late March, the Longhorns have struggled to put together any sort of positive momentum.

In the six series since, Texas has posted only one series win while being swept three times, dropping down to an RPI of 104 and eliminating any chance of receiving an at-large bid for the NCAA tournament.

But a nearly two-week long break might just be what the Longhorns needed.

The Texas bats came to life in a three-game set at Baylor with seven long balls and 18 runs, and, while it did come against a Bears team that barely got into the Big 12 tournament, the Longhorns showed a glimmer of hope in a 2-1 series win going into a must-win conference tournament.

“I think it’s really important to have that momentum and go off with a winning feeling and a decisive victory,” head coach Augie Garrido said.

Junior shortstop C.J Hinojosa came alive the most, finally breaking out of slump where he went two-for-10 with zero RBIs after fracturing a bone in his hand at TCU on April 25. Hinojosa more than doubled his season home run total, sending four home four balls over the left field wall, including the tying shot in the ninth in Saturday’s game. That shot was followed by solo home run by sophomore first baseman Tres Barrera to give Texas a 6-5 win.

“Coming back being down a run it’s good for our team,” Hinojosa said. “It shows character we have to not really worry about what’s going on and go out there and play our game.”

Jake McKenzie, who had been used as a relief pitcher for most of the season, showed his offensive prowess in the second game of a double header Sunday. The freshman singled twice with the bases loaded, bringing in two runs each in a four RBI evening to help the Longhorns to an 11-1 run-rule and the series win.

“It was fun; I got a chance to go out there and play so I took advantage the best I could and put the bat on the ball,” McKenzie said.

But beating Baylor in a three-game set is much different than winning the four or five games necessary to win the Big 12 tournament, which the Longhorns will have to do to avoid missing the NCAA tournament for the third time in four years.

Texas, who will enter the tournament as the fifth seed and play Texas Tech Wednesday at 9 a.m., went 2-10 against the top four seeds in the conference and were swept at TCU, who the Longhorns would likely have to beat two times just to reach the championship game.

But, on Sunday, Garrido referenced the 2008 Fresno State Bulldogs. That team had to win its conference title, which it did, and then went on a Cinderella run to win the national championship.

“It’s been done before,” Garrido said. “That’s the model for it.”