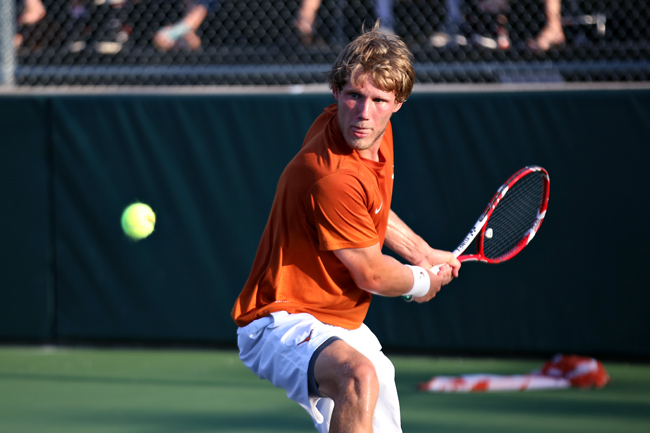 It’s been 71 years in the making — the Longhorns are NCAA Doubles champions for the first time since 1944, when John Hickman and Felix Kelley won.

Senior All-Americans Lloyd Glasspool and Søren Hess-Olesen finished their illustrious careers at Texas on top with a victory over No. 22 Hugo Dojas and Felipe Sores of Texas Tech 6–1, 3–6, 6–3.

“To see two outstanding seniors win a national championship in their last match at Texas is an amazing feeling,” head coach Michael Center said. “They played with no fear today and had so much determination and grit to finish their careers strong.”

The match was delayed and had to be moved indoors because of heavy rains. There was an additional two-hour delay because of a tornado warning. The match finally began at 4:45 p.m.

“We were both excited from the minute we woke up,” Hess-Olesen said. “This was our last college match ever, and it is not often when you play for a national title.”

The excitement showed as Texas came out storming, with a dominating 6–1 first set win.

“We came very strong,” Glasspool said. “We made a lot of first serves and a lot of returns.”

Texas Tech was able to break the Longhorns serve early in the second set to jump out to a 2-0 lead. The Red Raiders were able capitalize as they took the second set 6-3.

As the third set started, the torrential rain and winds weren’t the only things in a tailspin Monday afternoon. So were Hess-Olesen’s emotions.

“The third set was like a roller-coaster ride,” Hess-Olesen said. “We broke and went up 4–2, and I got pretty nervous and didn’t make first serves. They got back and, and then Lloyd played unbelievable in the last two games and got us through.”

The third set feautured three consecutive breaks, two from Texas and one from Texas tech.

The Longhorns were able to rally and claim the NCAA Doubles title with a 6–3 win.