The next Bill Nye: six communicators that explore science on modern platforms 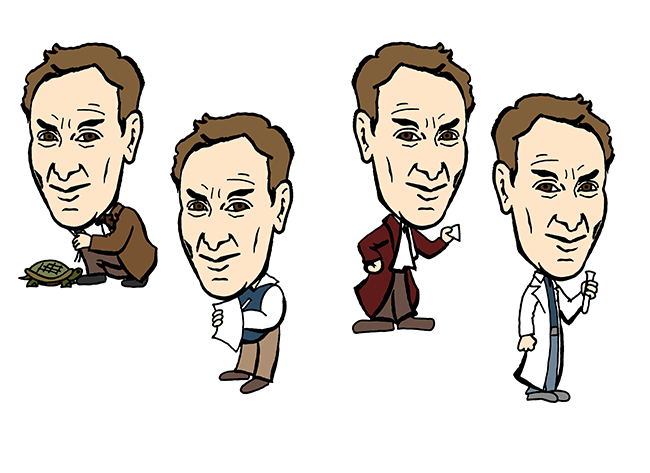 Bill Nye, host of the PBS show “Bill Nye the Science Guy,” is now available 24/7 to anyone with a Netflix account and a passion for scientific adventures. For the generation that grew up glued to Nye’s excited face on the glowing screen, however, exploring different perspectives and genres facilitates scientific and personal growth.

When he is not corresponding on YouTube with his brother John Green, Hank Green is a regular on YouTube’s “SciSchow.” This show provides the scientific news of the week in bite-sized, five-minute episodes, as well as a quiz show, Q&As, and profiles on the great scientists of history. He also works on the Greens' “Crash Course” for students who need a recap of what they missed while asleep in high school or introductory college classes.

To understand why humans can’t braid their leg hair like the hair on their heads, check out this episode of “SciShow.”

Austin native and UT alumni Joe Hanson is the host of PBS YouTube show “It’s Okay To Be Smart.” Maria Popova, brilliant creator of the blog “Brainpickings” and science promotor in her own right, calls him “Everyone’s favorite Feynman of the Tumblr era.” His three- to 10-minute videos provide insight into biology, physics, cosmology and the environment. He also holds question-and-answer sections for curious viewers of all ages.

Graslie’s vlog “The Brain Scoop” provides a close-up view of the scientific happenings at the Field Museum in Chicago. She began as a guest on one of Hank Green’s episodes of “Vlogbrothers.” Impressed by her articulation and passion in front of the camera, Green offered to help Graslie start her own show. “The Brain Scoop” took off when Graslie acquired a dead wolf she had to process for display. Her comfort with the weird, gross and unusual is contagious.

For those who like their science with a side of British comedy, “The Infinite Monkey Cage” may be the perfect podcast. The 45-minute shows usually have a mix of experts in science and comedians who ask “dumb” questions that often spark interesting discussions about topics such as scientific history and the arbitrary divisions between science and other fields.

To listen to Cox and Ince ponder whether the panda should be saved and the larger implications for biodiversity, check out this podcast episode​.

Yong’s National Geographic-affiliated blog, “Not Exactly Rocket Science,” regularly brings brains to the breaking point with fascinating stories about human biology and the natural world. He also provides links to important science news every week. Yong’s anticipated book, “I Contain Multitudes,” will explain how microbes influence the existence of life on Earth. If it’s anything like his blog, it will be a book worth picking up.

Yong’s post about how octopuses and other cephalopods can “see” light with their skin is a fascinating read.

If you are looking for well-thought-out whiteboard cartoons with voiceover explanations of your most burning questions, AsapSCIENCE is your YouTube channel. Many episodes discuss the human body in all its wonder and glory, such as the episode, “Why Do We Like Our Own Farts?” Also, Nye appears on the episode “Could We Stop An Asteroid?” which gives the show extra science guy credit.

In this episode, Moffit and Brown explain why it’s so hard to remember someone’s name.

Each of these science communicators are interesting and able masters of their respective medias. The children who adored Bill Nye no longer have to gather at 4 p.m. to hear him talk passionately about chemistry; enticing science education is now available in every form, all the time.