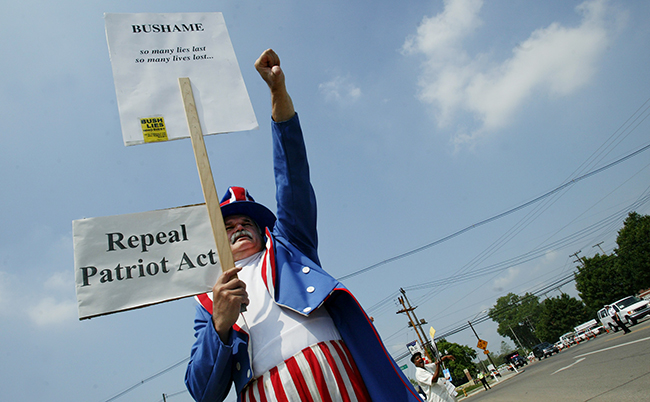 At midnight on Monday, key provisions of the USA PATRIOT Act expired for the first time since its hastened implementation in 2001 shortly after the September 11 terrorist attacks. For a brief time, a number of provisions, including the infamous Section 215, which was the main legal cover for the National Security Agency's (NSA) warrantless wiretaps, lapsed. And, while the Senate eventually passed a replacement that President Barack Obama signed Thursday, the interregnum was still positive nonetheless.

In the immediate aftermath of 9/11, and the fear that accompanied it, then-President George W. Bush pushed for a broad expansion of federal surveillance and detention powers. In the dead of the night, mostly without even reading the bill since representatives had three days to read 57,000 words, Congress passed the legislation by nearly unanimous margins. (The final Senate vote was 98–1.)

Originally, grassroots Democrats quickly organized against the law. But when Obama took office, ostensibly originating from those aforementioned grassroots, he had a complete change of heart on civil liberties and the like. Obama is now the main force behind the just-as-Orwellian-named and similarly toxic USA FREEDOM Act, the successor to the USA PATRIOT Act, which was signed Thursday.

Despite congressional promises of concessions, the USA FREEDOM Act is not meaningful progress. As a result, pertinent organizations, such as  the American Civil Liberties Union, rallied  against it.

"Unless the [USA FREEDOM Act] is significantly strengthened in the Senate, the [USA PATRIOT Act] should be allowed to expire," the ACLU said last month.

The USA FREEDOM Act pulls a familiar bamboozle. Bush's bill used a clever acronym with authoritative language to lull Americans into a false sense of security — just as Obama's bill does with civil liberties and constitutional protections. The USA FREEDOM Act reinstated Section 215, at least until 2017, and with it the unmitigated eavesdropping, dragnet-collection and online monitoring.

Edward Snowden, the government contractor turned whistleblower turned defector, first revealed to the public in 2013 the extent to which Section 215 emboldened the NSA to snoop on countless Americans’ phone conversations and other means of communications. Now, when we had finally rid ourselves of the odious statute that housed Section 215, Obama gave a blank cheque to continue it for at least two more years through the USA FREEDOM Act.

Obama's biggest critics on this issue have not been his hapless and obsequious compatriots in the Democratic Party, but Republicans — the party first responsible for this mess. Sen. Rand Paul (R-Kentucky), a Republican presidential candidate, has been particularly vocal.

With the USA FREEDOM Act now the law of the land, however, what the Fourth Amendment evidently does not do is inspire reverence or respect among the president or congresspersons.

Horwitz is the senior associate editor. He is a government senior from Houston.