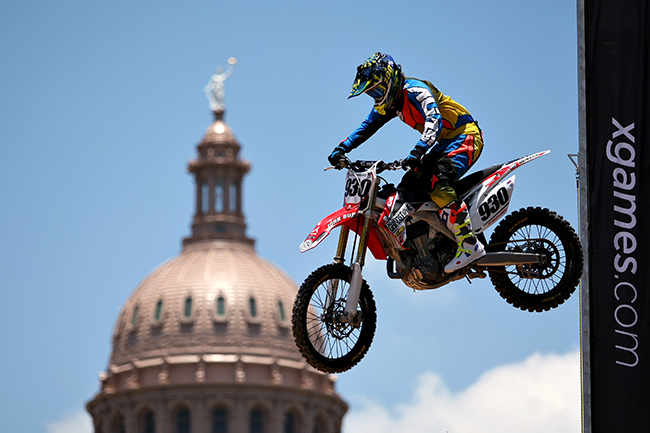 The City of Austin is preparing for the second annual X Games with lane closures and detours downtown. Streets south of the Capitol building will be blocked off for the opening event of the X Games, Moto X Step Up, which begins at 8 p.m. Thursday.

Austin Police Department has been closing lanes and roads since Tuesday and will fully block off Congress Avenue between Ninth and 11th Streets, as well as 10th Street from Colorado to Brazos Streets. The road closures allowed the X Games to build the necessary arena downtown.

Moto X Step Up requires riders to jump over a bar while on their bikes, riding up a dirt wall for propulsion. Builders worked for two days to construct the 30-foot near-vertical wall of dirt for the event in front of the Capitol, which ESPN spokesperson Danny Chi called a perfect backdrop.

“We think it’s a cool unique way to kick off the X Games and do something with the downtown vibe of Austin,” Chi said. “It also allows for really stunning pictures. The Capitol is an impressive building and having that in the backdrop adds something to the energy.”

Mayor Steve Adler, who will be presenting the medal for Friday’s Skateboard Big Air event, said he thinks the Games offer a positive impact for the city.

“A study by the organizers estimated an impact of $70 million for the event last year,” Adler said in an email. “I think we’ll see that grow this year. The X Games brings a lot of visitors to Austin, and they stay in hotels, rent cars and eat out a lot. All of those things benefit our community.”

“The city learned a few things after the first year, and we’ve tried to reduce any negative impact to downtown businesses,” Adler said in an email. “We’ll have less street closures than last year. The organizers have also made some changes to make the event more compatible with downtown.”

APD commander Tim Pruett said downtown businesses have been part of the planning process and are aware of lane and street closures and detours.

“We don’t have a whole lot of people to come up and complain about it,” Pruett said.

Last year, the event had no major security or safety issues, and the police expect the same thing this year, Pruett said.

“Last year went really well,” Pruett said. “It was a little bit different event — the bicycle and skateboard was held downtown. It went great, big crowd, no issues — I don’t think we had any calls at all for disturbances or assaults or anything like that. This year we don’t expect any events that would cause us to respond to any type of event that happens out there.”

The streets will open again 5 a.m. Friday, according to Pruett.