Six blockbusters to see this summer 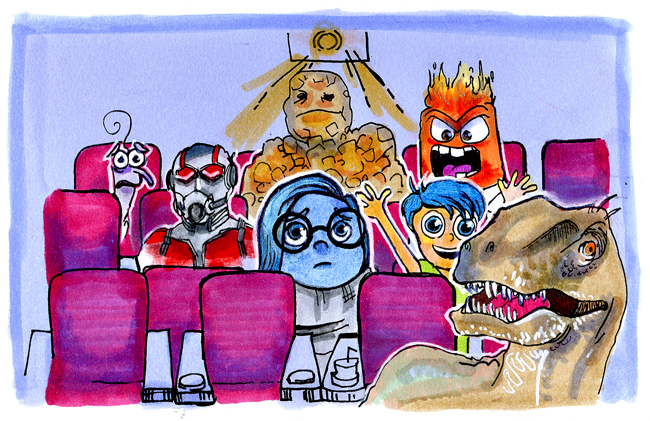 From dinosaurs to spies to superheroes, here is a list of this summer’s most action-packed and engaging stories to catch on the big screen.

The long-awaited fourth film in the “Jurassic Park” franchise, “Jurassic World” features a fully operational dinosaur park. All seems well until the park’s latest attraction, a hybrid dinosaur called the Indominus rex, escapes from captivity. The beast wreaks havoc and releases other dinosaurs, forcing dino-expert Owen Grady (Chris Pratt) and park manager Claire Dearing (Bryce Dallas Howard) to contain the outbreak. The trailers have teased the impressive special effects, but the film will also take a hard look at the morality of humans playing God.

Pixar’s latest animated film, the imaginative “Inside Out,” goes inside the head of a young girl, Riley, and follows the adventures of her emotions, personified as Joy (Amy Poehler), Fear (Bill Hader), Anger (Lewis Black), Disgust (Mindy Kaling) and Sadness (Phyllis Smith). When Joy and Sadness get lost inside Riley’s mind, she and the remaining emotions are left to deal with her family’s move to San Francisco. They discover life is full of conflicts and all emotions help a person cope. “Inside Out” has already received critical praise after its premiere at Cannes Film Festival, making it a must-see for kids and adults alike.

The next entry in the Marvel Cinematic Universe, “Ant-Man” tells the story of a formidable superhero with a dorky name. Ant-Man starts out as a criminal named Scott Lang (Paul Rudd). After he’s arrested, he’s given a chance to don the shrinkable suit and redeem himself by the retired original Ant-Man, Hank Pym (Michael Douglas). Pym tasks Lang with stopping the villainous Darren Cross (Corey Stoll) from militarizing the Ant-Man technology. Although the film will feature superhero action and comedy, “Ant-Man”’s real strength will lie in the emotional connections between the characters.

Impossible Missions Force agent Ethan Hunt (Tom Cruise) returns for his fifth film. This time he’s battling the Syndicate, a mysterious criminal organization bent on taking over the world. Hunt’s mission, should he choose to accept it, is to hunt down and destroy the Syndicate for good. “Rogue Nation” features crazy stunts and thrilling action, and the sequence where Hunt hangs onto a flying plane for dear life might just top the tower climbing scene in “Ghost Protocol.” Expect “Rogue Nation” to be a smart, sleek and fun action picture.

“Fantastic Four” reimagines Marvel’s first superhero team as a group of young scientists researching interdimensional travel. When a trip into an alternate universe goes wrong, they are granted with extraordinary powers. Four of them (Jamie Bell, Michael B. Jordan, Kate Mara and Miles Teller) decide to harness their powers and protect the Earth when another member of their team becomes the dreaded Doctor Doom (Toby Kebbell). “Fantastic Four” is a much-needed reboot to the critically maligned franchise, and, with “Chronicle” director Josh Trank at the helm, the film will explore the importance of family and friendship.

The Cold War gets cooler with this spy comedy, starring Henry Cavill and Armie Hammer. Napoleon Solo (Cavill), a CIA agent who teams up with his Russian KGB counterpart, Illya Kuryakin (Hammer), to stop an international criminal organization from spreading nuclear weaponry across the world. Solo and Kuryakin have to set aside their differences in order to get the job done. Although “U.N.C.L.E.” relies on a tested buddy-cop-film formula, director Guy Ritchie lends it a panache that few of its peers have. If modern spy films are getting you down with their gloom and doom, this cheery retro flick will be right for you.