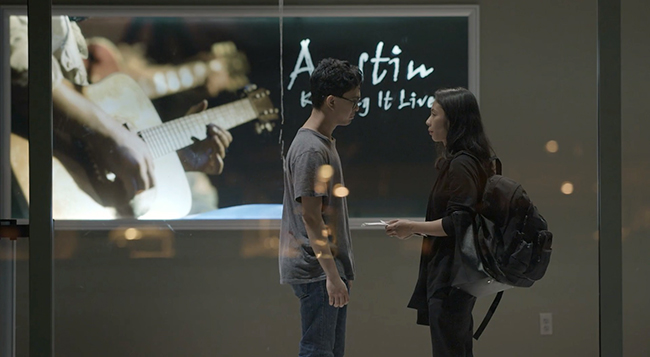 Before creating his short film “Motherland,” UT alumnus Komtouch “Dew” Napattaloong dreamt he had risen from the dead to be greeted by his family’s loving embrace.

The dream came a little over a year ago in anticipation of his mother’s indefinite departure to their homeland, Thailand.

“[The dream] encapsulated what I felt about my family and about us separating in real life,” Napattaloong said. “That dream reassured me and made me realize that my family will always be there for me no matter what.”

As “Motherland” director, actor and writer, Napattaloong used his dream as part of a monologue the film’s main character, Jen, gives. He and a crew of UT students spent this spring semester working on “Motherland” as part of Napattaloong’s senior thesis.

Based off of Napattaloong’s life, "Motherland” tells the story of an immigrant Thai family torn apart by the mother’s departure and the changing family dynamics that come with it. Napattaloong said he used this film to take an honest and needed look into Asian-American life.

“I wanted to tackle representation and the idea that there are these Asian people trying to have a normal life in the U.S.,” Napattaloong said. “Sometimes they struggle because this is not really their home and maybe their families are somewhere else.”

Napattaloong integrated his culture into the film by writing the dialogue completely in Thai. He said the film’s camerawork also demonstrates Eastern influences, using long, single-take shots instead of a short, quick Westernized style.

Throughout the writing process, he said he struggled with how much personal experience he wanted to share publicly. Although Napattaloong made sure to stay true to himself and his family, he feared what others might think of the film.

“It’s a touchy subject in a way,” Napattaloong said. “It’s a film about change, and it’s a film about uncertainty and anxiety. That’s everything I was feeling at the time.”

Napattaloong worried people might not connect to the story, but — when the film screened to a room of 300 UT students, friends and family in May — he said their reaction surprised him.

“People felt that they really enjoyed it and felt that it was important to them,” Napattaloong said. “That’s very humbling to me because I didn’t think that this film is something that a lot of people could relate to.”

Radio-television-film senior Lisa Ramon, who attended the screening, said the film touched her.

“‘Motherland’ made me cry because I’m really close to my mom,” Ramon said. “There were parts in the film where [Napattaloong] had to say goodbye to the mother, and I thought it was really moving. I really enjoyed it.”

Jeremiah Dalmacio, radio-television-film senior and “Motherland” producer, said the audience’s responsiveness thrilled him. After editing the film for days on end, he realized the team became somewhat desensitized to its message.

“Once we got to the screening, there were so many people crying,” Dalmacio said. “I looked over at [Napattaloong], and he was tearing up, and I was tearing up. It really was an experience.”

In light of audience’s response, Napattaloong and his team plan to submit “Motherland” to national and international film festivals this summer in hopes of fulfilling the film’s purpose.