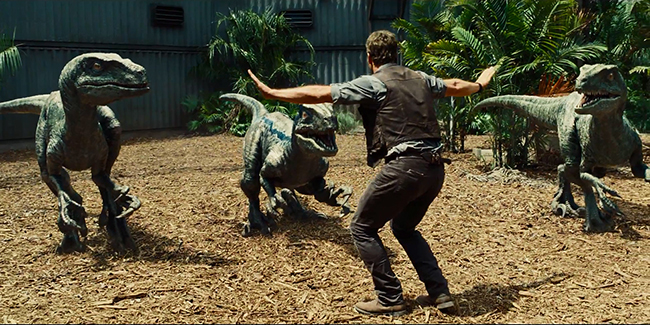 Steven Spielberg’s “Jurassic Park” ushered in the era of modern special effects. It introduced audiences to the vast potential of CGI, and it did so by bringing dinosaurs back to life.

The fourth “Jurassic” movie, “Jurassic World,” continues to masterfully resurrect these prehistoric creatures, but it’s nowhere near as revolutionary as the original. Director Colin Trevorrow serves up an exhilarating sequel, but the film features too few surprises and a villainous dinosaur too competent to be believable.

The film takes place 22 years after the events of “Jurassic Park.” Since then, a new dinosaur park, Jurassic World, has opened to the public. During that time, people have grown accustomed to the reemergence of dinosaurs, and they are no longer impressed. Jurassic World breeds the Indominus rex, a genetically modified hybrid dinosaur, to counter waning interest and increase park attendance. The I. rex isn’t a real dinosaur — it’s a monster.

Pratt and Howard are excellent co-leads. Pratt sustains the film with his charming and magnetic performance, and Howard’s character evolves from goal-oriented businesswoman to tough action heroine.

The cast serves the script well, but the material itself is predictable. Trevorrow seems more concerned with paying homage to Spielberg and allowing his fanboy fantasies to play out onscreen rather than tell a new story. These impulses get the better of him during the overblown final battle, which is a feast for the eyes and junk for the brain.

In terms of spectacle, “Jurassic World” might be this summer’s best extravaganza. The enormous dinosaurs of the park’s valley will dazzle viewers, and the aquatic lizard Mosasaurus inspires horrific awe with its gaping maw. Plus, there’s the old favorite, the T. rex from the first film, back for crowd-pleasing vengeance. “World” relies a bit too much on computer-generated to create its dinosaurs and not enough on life-like animatronics, but the filmmakers execute the special effects without flaw.

But not even great effects can save the believability of I. rex, which possesses an unreasonable level of intelligence. It foils the humans by camouflaging its heat signature from thermal sensors and, later on, clawing out its tracker and setting it in a river to lure park security into a trap. It’s a dinosaur — it shouldn’t understand the intricacies of high-tech equipment. By the end, the I. rex feels like a psychopathic, Joker-esque murderer.

Similar to the first film, “Jurassic World” explores the theme of man’s inability to control nature. Owen’s relationship with the raptors best expresses this idea: Although he’s trained the raptors for their entire lives, he still has to treat them with caution. When Owen’s colleagues decide to set the raptors on the I. rex, believing they’re loyal to human interests, it’s obvious things will go wrong.

“Jurassic World” features great performances, interesting themes and amazing special effects. It doesn’t beat out the original film, but Trevorrow’s effort to revive the “Park” franchise is a fun action thriller, hampered by a thin plot and a villain too smart for the film’s own good. Just turn off your noggin and strap yourself in — when the classic John Williams theme swells and the dinosaurs break loose, you’ll be glad you went along for the ride.