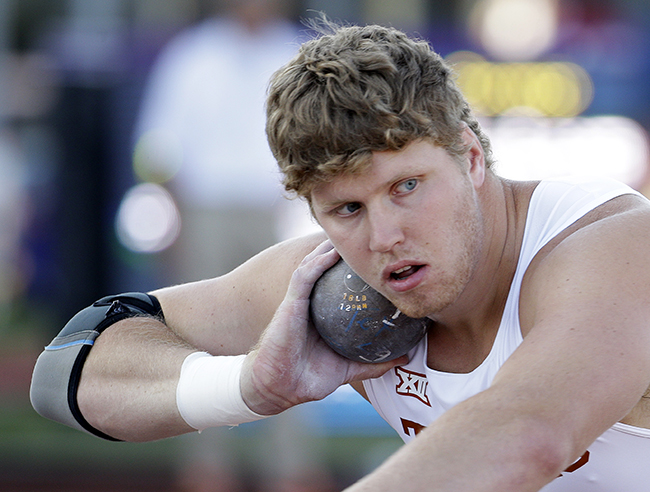 When the first rounds of competition ended Wednesday, Texas athletes set several personal records, one school record and had two All-American performances at the NCAA Championships in Eugene, Oregon.

In the 10,000 meters, Lutz was matched up against Edward Cheserek and Eric Jenkins of Oregon — both are considered among the best.

With 11 laps to go, Lutz managed to take the lead.

"Craig was up with some special people in the guys from Oregon, and he put himself in position and made a move," head coach Mario Sategna said.

But, with three laps to go, the pair of Ducks made their move to take the lead.

"[Lutz] took matters into his own hands, and I'm super, super proud of him because I'm tired of hearing people say you can't be at Texas and be a great distance runner," Sategna said. "It's those types of performances that prove you can."

Crouser had his hands full. Not only was he vying for a three-peat — a feat that hasn’t been accomplished since 1994 — but he was trying to do so in his home state.

Crouser finished fifth in the shot put and was unable to claim back-to-back-to-back titles.

Crouser fell behind in the fifth round and fouled on his final attempt — unable to reclaim the lead.

“It just wasn’t his day,” Sategna said. “This was a great field, I was excited for the guy from Buffalo because you don’t often see people from smaller schools win a national title, so definitely your hat goes off to him.

In the 100 meters, sophomore sprinter Senoj-Jay Givans broke his own school record in the semifinals.

Givans posted a time of 10.03 seconds, and although that was only good enough for third — behind Baylor’s Trayvon Bromell (9.90) and Andre the Grasse of USC (9.98) — it was good enough to qualify him for the finals Friday.

Freshman Wolf Mahler started off slow in the decathlon but finished strong.

Thanks to posting three straight personal records, he moved up from 19th place to 15th by the day’s end.

“Wolf had a great day being a late admit to the meet,” Sategna said.

Mahler will compete in the pole vault and the 1,500 meters Thursday. Sategna said he is confident in Mahler’s All-American status.

“Now is when the decathlon really starts,” Sategna said. “It will be survival of the fittest. Wolf, he’s a tough cookie. He will kind of get us in a scoring position on the final day.”

The NCAA Championships continue Thursday and will be broadcasted on the ESPN family of networks.