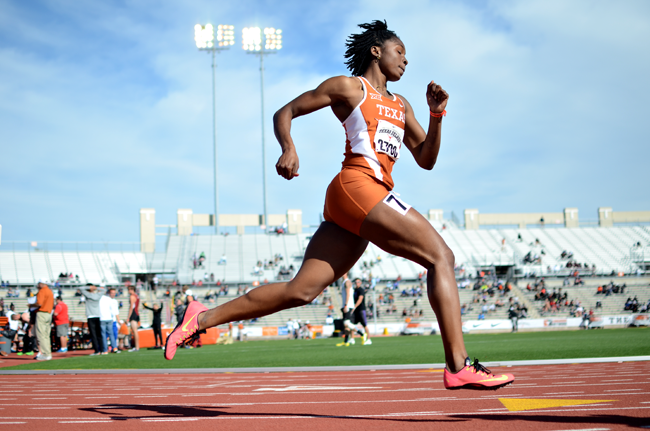 The Longhorns ended their second day at the Track and Field NCAA Championships in Eugene, Oregon, with more advances to the finals and several athletes set personal records.

Texas automatically advanced to the finals in the 4×400-meter relay. The team of freshman Ariel Jones, sophomore Kendall Baisden, junior Melissa Gonzalez and senior Ashley Spencer won their heat in 3:32.73 despite Spencer having a slight trip up after incidental contact occurred with another runner. Texas won the NCAA Championships 4×400-meter relay in 2014.

Just like Sategna expected, sophomore Wolf Mahler moved up in the rankings after setting three personal records Thursday in the decathalon.

"We knew that if he was in a position, he's a phenomenal 1,500-meter runner," Sategna said. "So we knew he could make up some ground there and bump up from 10th place into seventh and almost bumped up even more.”

Junior sprinter Morolake Akinosun, who was recently named to the Bowerman watch list, won her 100-meter heat with the fastest time at the semifinals, 10.96 seconds, automatically qualifying her for the finals.

Akinosun placed second in the 200-meter heat and will be representing Texas in both sprinting events. Sategna said Akinosun is an athlete that is able to keep her cool under pressure.

"[Akinosun] never loses sight of things and has great balance,” Sategna said. “She's the type of person you want to build your program around. I think she keeps her sense and never panics.”

Senior sprinter Morgan Snow finished 11th overall in her individual event, the 100-meter hurdles, with a time of 13.05 seconds.

Sategna said he knew she had to run sub-13 seconds to advance. Snow’s career best is 12.88 seconds, and, before the meet, Snow said her goal was to get her time to a 12.60 by the end of the year.

"You knew with the earlier heats it was going to take a lifetime best to advance, and she hit the first hurdle and clipped another,” Sategna said. “She'll come back to lead off the relay and give us a great leg."

Sategna said everyone they were expecting to advance, did — except for Snow, but he still likes the position of the team.

"I feel really good because at this point people that are doubling and tripling, it's what we do with recovery that will play a huge role in how these ladies feel on Saturday, but I feel like we're in a good spot,” Sategna said.