Science Scene: The darker side of sunshine 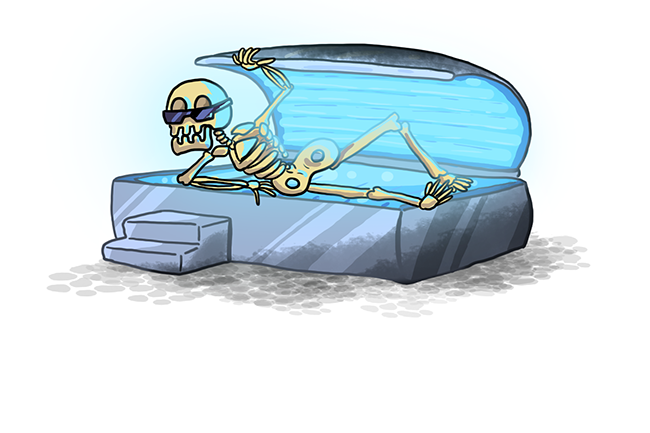 UT students ready for a long, hot summer need to be careful about sun exposure. For those who aren’t, one UT professor is on the case.

Since 2005, biomedical engineering professor James Tunnell has been working on a device that can detect skin cancer. Tunnell and his team are currently working on the third incarnation of this device, which will undergo clinical trials on 250 patients over the next two years.

“Hopefully, this will be the last version of this device before it gets to dermatologists and biotechnology companies,” Tunnell said.

Diffuse reflection is sensitive to cells called chromatophores, which include hemoglobin, the protein molecule that carries oxygen in the blood. Diffuse reflection detects different aspects of the blood, such as how much oxygen each blood cell is carrying.

This technique helps to detect cancerous cells, which often demand more oxygen. It also measures how the cells scatter the light around them. Disorganized, cancerous skin cells diffuse light in a different way than normal skin cells.

The second light-detecting technique, laser-induced fluorescence spectroscopy, is sensitive to the binding material in collagen, the tissue that gives skin its elasticity. It’s also sensitive to NADH, a molecule crucial in cell metabolism. Changes in the amount of either of these substances could indicate that skin cells are not up to their normal activities.

Tunnell added the third and final modification of the detector in 2010, Raman spectroscopy. This addition allowed the probe to accurately detect melanoma. Raman spectroscopy detects lipids, or fatty cells, and proteins that Tunnell believes change when the melanocytes become cancerous.

Now, Tunnell and his team are working on shrinking the skin cancer detector down to a manageable size. Last year, the detector took up the space of roughly two mini-refrigerators. Tunnell wants the device to be small enough to be easily pushed around a hospital in a cart.

Tunnell says mistakes from his own youth keep him motivated in his research. He grew up in sunny South Texas and says that his skincare was often lacking.

“I grew up in Corpus Christi and was in the sun way too much,” Tunnell said.

The U.S. Preventive Services Task Force recommends people between the ages of nine and 25 avoid excess ultraviolet radiation, and especially tanning beds, as much as possible.

According to the American Association for Cancer Research, five or more sunburns — during a similar age range — increases melanoma risks by 80 percent. Scientists at the International Agency for Research on Cancer have classified tanning beds as a Group One carcinogenic — the same group as radiation from atomic bombs.

Students should be weary of the dark, radioactive side of the sun this summer. By staying away from tanning beds and applying sunscreen responsibly, students can hopefully reduce their risk.