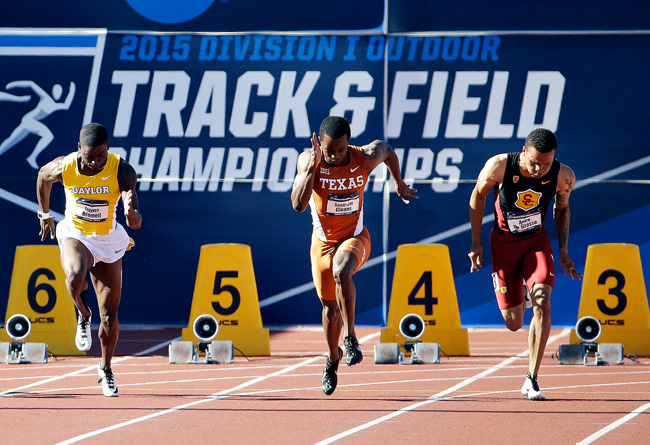 Texas men's track and field team ended its season with a seventh-place finish in the NCAA Championships.

In the third throw of the competition, Crouser moved up to fifth place when he threw 60.18 meters (197–5) — his best throw of the season.

However, Crouser was unable to move up in the field; as a result, he finished the event in fifth place and added four points to the Longhorns’ total.

“I know Crouser was disappointed. He wanted to go out there and seal a victory,” head coach Mario Sategna said. “The great thing is we’ll have him back next year for indoors.”

Harris posted a mark of 57.16 meters (187–6) to finish the event in 13th place. Harris appeared to be in position to move into the finals after the first flight. In the second flight, however, many athletes performed better than Harris. As a result, Harris was moved down in position and was bumped out of the final.

“Clint has worked hard,” Sategna said. “He’s graduated from the University of Texas, and he’s going to help us next year as a volunteer coach.”

In the 100 meters, sophomore sprinter Senoj-Jay Givans was finally able to post a sub-10 time after being so close throughout much of the season.

Givans posted a wind-aided time of 9.97 seconds to finish fourth at the NCAA Championships.

With the fourth-place finish, Givans added five points to the Longhorns’ team total.

“What a hell of a field to run 9.97 and be fourth,” Sategna said. “There’s been a lot of great sprinters at the University of Texas on the men’s side, but, to lower that school record yesterday in prelims, I think it’s a phenomenal feat, and he’s only a sophomore.”

The Texas men were able to improve on their 11th-place finish from last year, when they tallied 19.5 points. Sategna said he is proud of his team but still wants the bigger trophy in future years.

“Overall, with everybody from Lutz to Wolf that was huge for our program to come in not even ranked in the top 10 and to be close to the top four is great,” Sategna said. “The next step is to walk out of here with a team trophy. We’ve got a great class coming in, and we’ve got some great guys back home that have some work to do to figure out what it takes to get here. It’s a huge building block.”

It is now the women’s turn Saturday with the finals of running events set to start at 2:05 p.m. PST. The meet will be shown on ESPN 2.