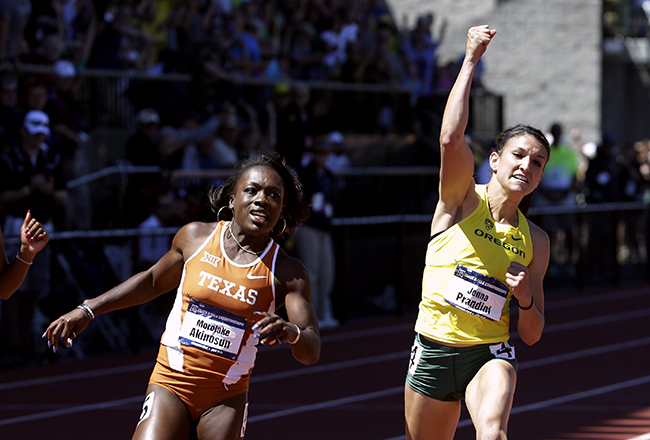 The Track and Field NCAA Championships wrapped up Saturday afternoon as the Longhorn women tied for ninth with Kansas State. They tied with a team total of 28 points.

The men’s team finished seventh with 26 points Friday, making Texas one of only six schools to have both men and women place in the top 10.

To add the first points to the board for Texas, the 4×100-meter relay team, consisting of senior Morgan Snow, junior Morolake Akinosun, freshman Shania Collins and sophomore Kendall Baisden, started off the day running 43.38 to finish fourth for the Longhorns. The relay team earned five points for Texas.

Akinosun finished her junior year by setting a school record in the 200-meter sprint. She ran 22.52, which was both a personal and school record for Akinosun. She placed fifth and her time is the fastest fifth-place time in NCAA Championship history.

During the 100-meter dash final, Akinosun went stride-for-stride next to Oregon junior Jenna Prandini. By just one-hundredth of a second, Prandini took the lead to earn the title. Akinosun ran a 10.97, placing second, while Prandini crossed the line at 10.96.

Akinosun said she’s happy with her performance and setting both a new personal and school record.

With her individual races, Akinosun added 13.5 points toward the final team points for Texas.

Sprinters Baisden and senior Ashley Spencer both took on the 400-meter race in the finals. Baisden took second place with a time of 51.74 seconds, and Spencer placed seventh with a 52.65.

The 4×400-meter relay team of junior Melissa Gonzales, Baisden, Akinosun and Spencer finished eighth in the relay with a time of 3:37.31 seconds.