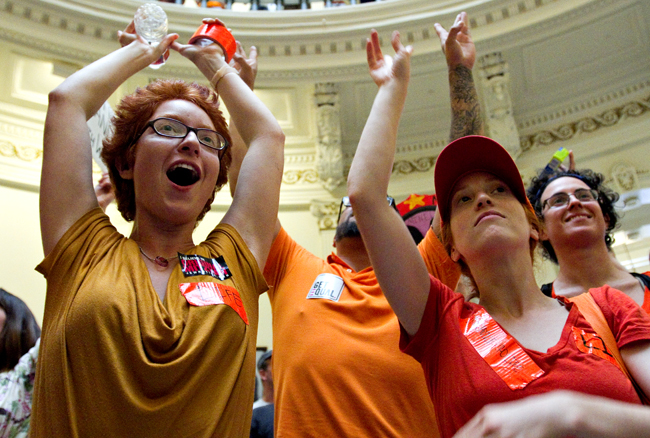 Pro-abortion rights activists demonstrate against Senate Bill 1 at the Texas State Capitol rotunda in Austin on Friday, July 12, 2013. The proposed legislation would enact severe restrictions for abortion clinics across the state.

After a court decision June 9, Texas is expected to have 10 operating abortion clinics after the 5th Circuit Court of Appeals largely upheld the provisions laid out in House Bill 2.

“This unanimous decision is a vindication of the careful deliberation by the Texas Legislature to craft a law to protect the health and safety of Texas women,” Gov. Greg Abbott said in a statement June 9.

The 10 remaining facilities will be less than a quarter of the 41 facilities that were open in 2012. One of two Austin clinics will close.

The plaintiffs challenged two provisions of the bill: one requiring physicians performing an abortion to have admitting privileges at any hospital within 30 miles of where the abortion is performed, and another requiring all abortion clinics to meet standards set for ambulatory surgical centers. Both provisions were largely upheld.

The ruling comes after a series of back-and-forth rulings by state and federal courts. U.S. District Judge Lee Yeakel ruled the bill unconstitutional in October 2013 because he said the admitting privileges requirements place an undue burden on patients. The 5th Circuit Court then overturned  Yeakel’s opinion in October 2014. The Supreme Court ruled later that month to block the admitting privileges and the ASC requirements.

The 5th Circuit's ruling overturned the Supreme Court’s hold on the two provisions, but the court made exceptions for a clinic in McAllen. The clinic is exempted from meeting the admitting privileges requirement or the ASC requirement. Had the clinic closed, patients in the Rio Grande Valley area would have had to seek access to abortions from providers in San Antonio, and the court ruled that would have denied women from access to abortion.

“The 5th Circuit has once again put their political ideology above the law and failed to recognize that HB2 is an undue burden on Texans’ access to safe, legal and timely abortion,” said Heather Busby, executive director for NARAL Pro-Choice Texas, in a statement June 9.

But opponents of abortion rights, such as Attorney General Ken Paxton, disagree, stating that the ruling ensures the health of women in Texas.

“Abortion practitioners should have no right to operate their businesses from substandard facilities and with doctors who lack admitting privileges at a hospital,” Paxton said in a statement June 9. “This ruling will help protect the health and well-being of Texas women.”

When the 5th Circuit responds to the plaintiffs’ request for an injunction — a likely “no” from the unanimous panel —  the appeal will go to the Supreme Court where the case will be decided.