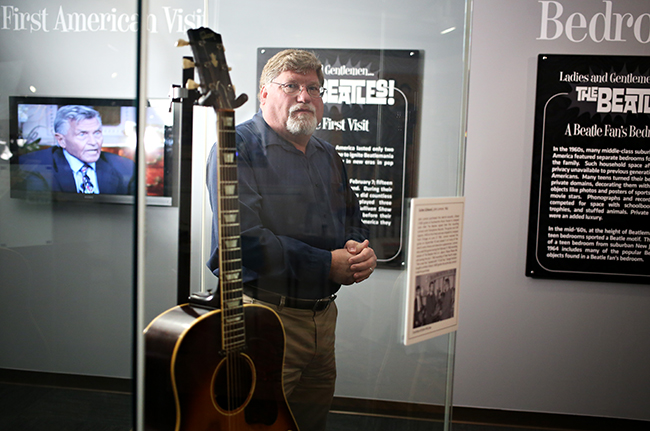 Symptoms of Beatlemania swept a record-breaking crowd on Saturday as they spent hours in a sweaty frenzy, waiting to enter the LBJ Presidential Library’s latest exhibit.

More than 50 years after The Beatles’ inception, the new exhibit — Ladies and Gentleman…The Beatles! — features over 400 pieces of Beatles memorabilia ranging from records to wardrobe and will remain open through January 2016.

Open for less than a week, the exhibit surpassed staff expectations, welcoming 2,100 people on its first day.

Visitors can walk across a mock-up of Abbey Road and admire John Lennon’s Gibson guitar, on display until June 29, which he used to write some of the band's early hits such as “I Want to Hold Your Hand.” The exhibit also features an oral history booth which Bob Santelli, Grammy Museum Executive Director, said allows fans to record their favorite memories of the band.

“I was directing people to the booth that were at their concerts, that grew up listening to them,” Santelli said. “They all felt like they had these personal connections that were still strong today. People felt like they knew them.”

Fab Four Exhibits, LLC, a group of four avid Beatles collectors, owns the majority of the artifacts. The group pooled pieces of their collections together and partnered with the Grammy Museum to create a traveling exhibit focused on The Beatles’ North American years. Russ Lease, a Beatles collector for 35 years, said the group wanted to share with other fans.

“Nothing like this has ever been done before,” Lease said. “For years these pieces have been in people’s houses, in their basements, and it was time that other people got the chance to see them.”

Lease and his partners are some of the foremost collectors of Beatles memorabilia in the country. He said The Beatles’ 1964 appearance on the Ed Sullivan show first sparked his interest in the band.

Years later, he became the proud owner of the drumhead they used in the historic television performance and is now part of the exhibit.

“I was just 7 years old during the Ed Sullivan performance,” Lease said. “I vividly remember seeing it. Getting that drumhead was getting a piece of American history. It was one of the most important entertainment moments of the millennium.”

With 73 million fans tuning in to watch, The Ed Sullivan performance is often cited as the beginning of the British Invasion. But before British artists invaded the U.S., American musicians, such as Little Richard and Buddy Holly, had already begun to influence Britain.

Santelli said many of the exhibit’s artifacts speak to America’s affect on The Beatles.

“Some of the coolest things in the exhibit are the setlists,” Santelli said. “People are always surprised by how many American songs they were playing. What The Beatles did was interpret that music and give it back to us.”

Santelli said watching different generations of fans come through the exhibit has proven the band’s lasting success, demonstrating their continued cultural impact decades after their break up.

“On opening day, grandparents and grandchildren were side by side,” Santelli said. “Those songs stuck with them and they want to share them. The Beatles made connections with the public through their music.”

LBJ museum curator Mike MacDonald, said the exhibit is a perfect fit for the library — despite the fact that President Johnson wasn’t particularly fond of the mop-topped group.

“We focus on the ʼ60s and The Beatles provided the soundtrack to the ʼ60s,” MacDonald said. “They changed American history from pop culture to way people thought. It was a fundamental change in American culture.”