Which place is better for pickup basketball — the Rec or Greg? 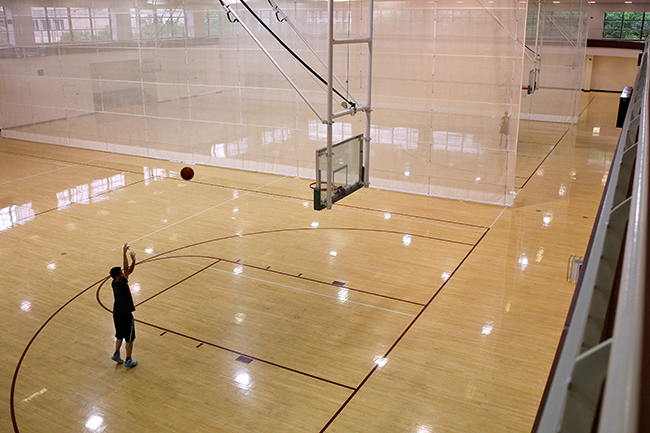 Taking a game of hoops seriously isn’t just for the professionals, and Gregory Gymnasium and the Rec Center offer competitive pick­up games (and maybe the occasional trash talk) and also a wide range of people practicing their basketball skills.

Although not being able to watch the effortless­looking alley-oops or the last five ticking, pressure­filled seconds left on the shot clock is sad for basketball lovers everywhere, UT students can still feel the “Game 7 of the Finals” level of intensity in the Gregory gym.

Both of the gyms offer different environments to the UT student body, but Gregory is by far the most popular of all the RecSports facilities, according to their website, and it seems to be for good reason.

Gregory offers itself as a piece of history on campus, spacious courts for numerous pick­up games and the social aspect of playing with a newly formed or established group, while the Rec is smaller, a little off the beaten path and less crowded gym. Jason Ikpatt, cell and molecular biology graduate student, recently moved to Austin for school and said he has gone to Gregory every single time he’s wanted to play basketball.

“I actually got lost the first time I went in there to play because the layout was strange,” Ikpatt said. “But, once I found the courts, the games that were going on looked pretty intense. It was great competitive basketball, and I felt like I got a good workout.”

Ikpatt said one downside he’s seen is extreme crowds during events such as high school tournaments.

Political communications junior John Stickler said he plays at both facilities but favors Gregory more because he likes to have people to play with.

“Greg is nice because there are always pick­up games from about 2 p.m. until close,” Stickler said. “Moreover, most people would probably say that the courts at Greg are marginally nicer.”

Despite playing in Gregory more often, Stickler said he sees advantages to both.

“The Rec on the other hand is hardly ever crowded, and there is generally an open hoop if you just want to avoid the crowd and shoot around,” he said.Gregory is more centrally located to campus and offers seven basketball courts, which is four more than the Rec Center has. For 46 years, the gym served as the home for the Texas basketball teams until the Frank Erwin Center opened up in 1977.

Incoming freshman Savannah Smith first got to explore campus during her orientation this past week. Smith, who said she lives and breathes basketball, checked out both facilities to scope out the courts and said Gregory had that “wow” factor.

“There are just so many courts,” Smith said. “While I was there, I found a stray ball and shot a few, but I can’t wait to actually play there.”