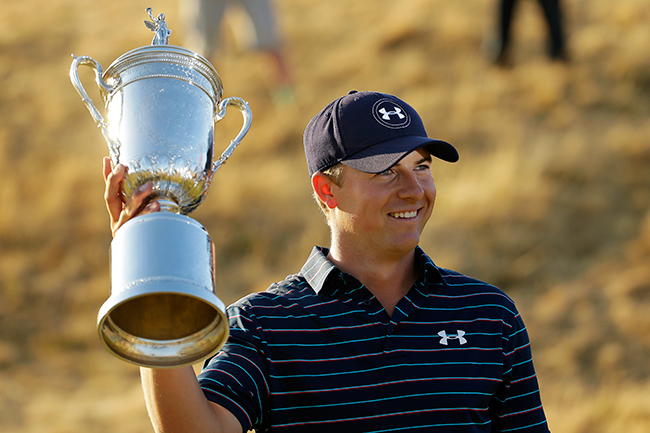 After making history for being the second youngest golfer to win the Masters, 21-year-old and Texas alumnus Jordan Spieth made history again this weekend after winning the 2015 U.S. Open.

“Pearl and I are thrilled that Jordan Spieth is a two-time Major Champion,” men’s golf head coach John Fields said. “We are so excited that Jordan continues in the line of great champions at Texas. He proudly lights our Tower orange again.”

Spieth completed the first two legs of a Grand Slam, which is an unofficial term denoting when a golfer wins all four major events in one year, on Sunday evening after finishing just one stroke ahead of his closest competitors, Dustin Johnson and Louis Oosthuizen, to win the U.S. Open.

Spieth started out the day tied at four under par alongside the board leaders Johnson, Jason Day and Branden Grace. He finished at five under after he birdied the last hole.

“It’ll take a while for it to sink in. I didn’t think this would end and I’d be holding the trophy,” Spieth said. “I didn’t have my best stuff, I didn’t have my ball strength at all and we really grinded those four of five-footers and that was the difference.”

Johnson missed a short putt on the 18th hole that would have forced a playoff between him and Spieth.

Spieth said he didn’t “have full control of the golf ball,” during the tournament and gave a lot of credit to his caddy, Michael Greller.

“At certain times I was getting frustrated out there and that mainly could only be seen between me and Michael,” Spieth said. “He really deserves a lot of credit this week, this was the best he’s ever caddied. He worked harder this week than he ever has and it certainly showed and payed off.

Spieth’s Masters win in April and this U.S. Open win made him the sixth player in history to win two major tournaments alongside Craig Wood, Ben Hogan, Arnold Palmer, Jack Nicklaus and Tiger Woods, and he is the youngest player to win two major championships since Gene Sarazen in 1922.

“Those names are the greatest that have ever played the game and I don’t consider myself there,” Spieth said. “But [I’m] certainly off to the right start in order to make an impact on the history of the game.

This year the tournament took place at Chamber’s Bay, a golf course in University Place, Washington — the first time a U.S. Open had been played on the course. Despite being in the lead for most of the rounds, Spieth didn’t hold back his criticisms of the course layout.

He made headlines on day one after playing the 18th hole and mics caught him saying it “was the dumbest hole” he had ever played in his life. When asked about it later, Spieth stuck to his comments.

Over the tournament, the USGA switched the 18th hole back and forth between being a par-4 and a par-5, and was expected to be the former on the last day of the Open. Spieth’s opinion of the hole not being a good par-4 had an influence on USGA executive director Mike Davis’ decision to play the last hole as a par-5.

“The U.S. Open is conquering the hardest layout in all of golf,” Spieth said. “The fact that we did it is amazing.”