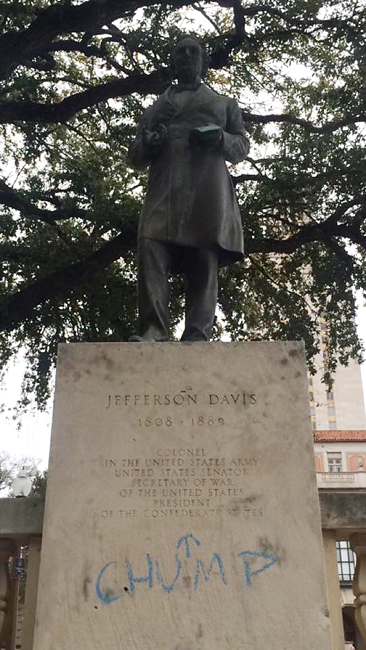 The shooting in Charleston, South Carolina, was not a tragedy. It was an entirely predictable result of a country mired in violence and racism. The political establishment is incapable of grasping this, but it is the basic point of the Black Lives Matter movement: Black Americans do not have a right to live or be safe, whether they are walking on a street, hanging out at a pool, playing at a park, going to a bank, sleeping in a car or praying in a church. But they should.

This basic point has been willfully ignored by the mainstream, including right wingers at Fox News as well as liberals such as President Barack Obama. Obama’s only characterization of the shooting is as a “tragedy,” as if it were a tornado rather than a racist with a gun and a plan. This characterization fails to acknowledge how the violence is defined by its constant nature. This omniscience is upheld by numerous social institutions, such as the police, educational systems, and particularly relevant for UT students, racist monuments like statues.

This is a failure of literally historic proportions. During and after every black struggle for basic freedoms and rights, there is a racist, violent backlash and tacit (or blatant) acceptance of this by the political establishment. FBI Director James Comey displayed his ignorance of this history when he called the shooting simply a hate crime and refused to initiate a terrorism investigation because it wasn’t a “political act.” People like Dylann Roof are the modern day equivalent of homegrown domestic terrorist organizations such as the Ku Klux Klan.

The KKK formed in the midst of the post-Civil War Reconstruction era, when black freedmen were attaining basic rights like suffrage. The KKK was allowed to terrorize, torture, burn and murder as “the white man’s party” retook power in the South. As black people migrated north in the early 19th century and initiated a new wave of struggle through labor and black advancement organizations, the KKK resurged. A contemporary study found that police overwhelmingly condoned and often participated in lynchings of black people.

Politicians shared some of the KKK’s intolerant sentiments. Woodrow Wilson’s presidency saw the reverse of several Reconstruction Era de-segregation policies, the injurious termination of numerous black workers in government and the expulsion of black activists from the White House for arguing against such injustices. Furthermore, Wilson praised the KKK’s favorite recruiting tool, the racist film “The Birth of a Nation,” whose myths of black domination of white men and rape of white women were also echoed by Roof.

During the backlash against the civil rights movement, coinciding with another KKK resurgence, the federal government (under former President John F. Kennedy and former President Lyndon Johnson), despite eventually supporting civil rights legislation, had a poor record of supporting civil rights movements by repeatedly refusing to protect protesters from racist violence. Freedom Riders were beaten as the FBI watched; civil rights workers in Mississippi were murdered; after the murder of Martin Luther King Jr. in 1968, soldiers and police targeted and killed black rebels; and the FBI implemented COINTELPRO, which involved multiple assassinations, infiltrations and other illegal activities.

These are not tragedies. These events are terrifyingly cold and calculated — the correct word is racism. Roof is entirely aware of this, as his website is awash with the language and symbols of apartheid, white supremacy, the KKK and neo-Nazism. Before the political mainstream decides to self-righteously condemn him, however, they should reckon with the fact that South Carolina continues to proudly fly its Confederate Flag. People love to talk about how the flag stood for “states’ rights,” only telling half the story — the flag stood for states’ rights to allow ownership of black slaves.

For years, similar excuses have been made for UT’s own racist monuments. Wilson is just one of the several racist leaders for whom we have built monuments. Attention has recently been drawn to the statue of Jefferson Davis, president of the Confederacy during the Civil War.

After decades of apathy from the Student Government, a satirical SG presidential campaign successfully pushed a resolution to have the Davis statue removed. The arguments against this resolution are typical, suggesting that the statue represents states’ rights and serves a historical purpose. Again, this is only half the story — it ignores the question of what purpose we want to serve. We can acknowledge the history of racist violence, or we can glorify the racists who commit(ted) that violence. Using a statue of Davis as a way of remembering the horrors of slavery would be like building a statue of Roof at the Charleston AME church as a way of remembering the massacre he committed.

UT President Gregory Fenves similarly has a choice to make in response to the SG resolution. He can either participate in the whitewashing or stand in solidarity with black Americans and UT students. This era’s black struggle — Black Lives Matter — has left no one with an excuse to deny that centuries of racist violence continues today. The depth of this oppression requires a deep correction, so solidarity is not a small task. The SG leadership itself does not seem to grasp this as they are advocating that Fenves moves the Davis statue to a museum.

There is nothing historically valuable about this statue. Like any monument, it portrays a certain idea, and this one is racist and gets the history wrong. Fenves’s choice between whitewashing or solidarity boils down to a choice between half-measures such as a museum exhibit or smashing the statue to pieces.

Rathi is a computer science senior.