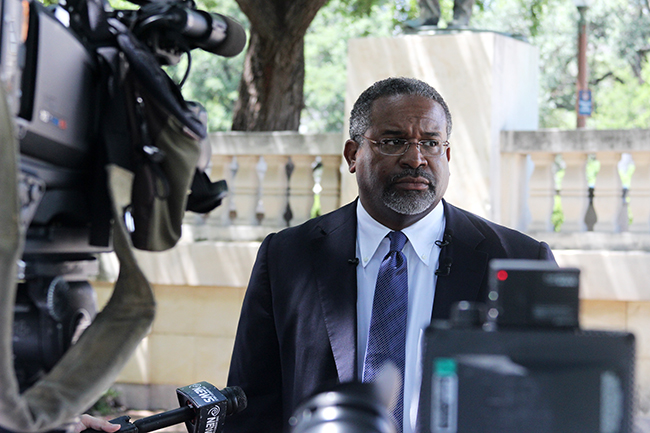 The University addressed the vandalism of three Confederate statues Tuesday at a press conference held in front of the Jefferson Davis statue.

Before the conference started, President Gregory Fenves released a statement saying he would be announcing a committee of students, faculty members and alumni that would discuss the future of the statue.

Gregory Vincent, vice president for the Division of Diversity and Community Engagement, said he will chair the committee and a task force, which will look into all repercussions of removing the Jefferson statue from campus.

“It’s important because it is about history, and it’s important that we have a campus community that inclusive and welcoming to all,” Vincent said. “We want to strike a right balance, and we do the right things the right way.”

Following the press conference, UT released a clarification saying Fenves will make the final decision of the statue’s place on campus. He will consult with the Board of Regents, but their approval is not required.

As far as a timetable for the process, Vincent said Fenves has asked the task force to be comprehensive in their decision but to work as quickly as possible.

Vincent said a recommendation will be made by the end of the summer.

“We want to take a look at all the options,” Vincent said. “We don’t have preconceived notions of what those recommendation may be. We just want to make sure we look at all options at this time.”

Vincent said the task force will also make a recommendation to Fenves regarding other Confederate statues on campus being removed.

Vincent said the issue of removing the Davis statue had been discussed in the past, but the school believed it would be better to focus on recognizing other influential figures.

“Our strategy has been to look forward because we felt it was a part of our history and work on statues of where we are today,” Vincent said. “That is why we have the Barbara Jordan statue, the Cesar Chavez statue [and] with a student-led initiative, we now have the Martin Luther King statue.”

Liberal arts freshman Beatrice Gilmore said the vandalism was a significant statement for an issue that has existed for a while.

“I thought it made a pretty big impact,” Gilmore said. “I thought it was a bold move, maybe not the best move, but it also brought necessary attention.”

Student Government President Xavier Rotnofsky said he is excited about the formation of the task force and that Fenves has been receptive to SG’s concerns.

SG passed a resolution in March supporting the removal of the statue.

Rotnofsky said he has heard feedback from people outside the University and he heard from a descendant of Davis who supported their effort to get the statue removed.

“Interestingly, I have gotten a lot of messages from people who have family that fought in the Confederacy who agree statues of Confederate soldiers should not be prominently honored on our campus,” Rotnofsky said. “I even got a message from some of the direct descendants of Jefferson Davis who are for taking the statue down.”