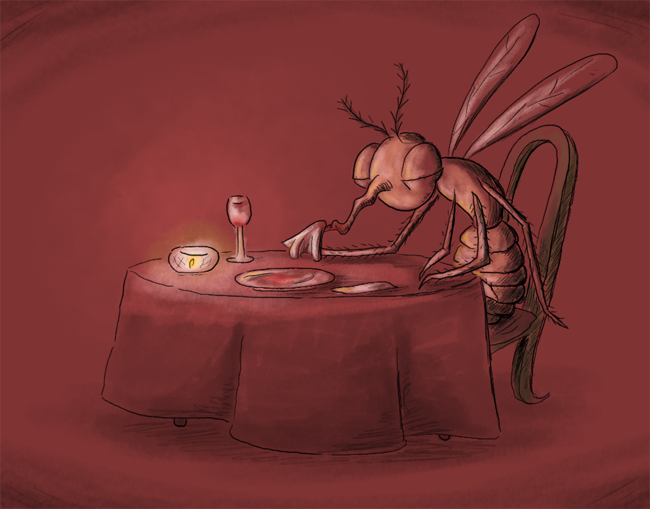 At best, mosquitoes are a nuisance. At worst, they are the deadliest animals on the planet – killers deeply attracted to the smell of dirty socks.

Mosquitoes are known as carriers of deadly diseases, such as malaria, West Nile virus and encephalitis. People suffering from the annoying bites, however, may wonder whether they are at risk for blood-carried diseases not commonly associated with mosquitoes, such as hepatitis or HIV.

In 1987, in the thick of the AIDS crisis, scientists worried about just this question. The Office of Technology Assessment, a former office of the U. S. government that provided scientific analyses for Congress, investigated this topic and concluded the chances of getting HIV from a mosquito were effectively zero.

A mosquito can spread diseases such as malaria because, after it bites an infected person, the disease is able to multiply inside the mosquito. The disease is often concentrated in the mosquito’s saliva, which it injects into its victims when it bites. Fortunately, HIV can’t replicate within insect cells, and that makes this mode of transmission impossible.

However, physical transmission of the disease carries a small risk.  A mosquito is sometimes interrupted in the middle of its blood feasting. When this happens and the mosquito moves on to another victim, the blood from the last person still on its mouthparts. The leftover blood could, hypothetically, contain the HIV virus.

It is highly unlikely that HIV could spread through these sloppy seconds. Firstly, the HIV-positive person would have to be an easy flight away from the mosquito’s second victim. Many HIV-infected patients do not have detectable levels of HIV in their blood – a percentage that is getting higher every day as treatments improve. The mosquito would have to make contact with the virus in order to transfer it — a highly unlikely scenario.

When a mosquito bites, it doesn’t consume much blood, and only a small percentage of that blood is left on the mouthparts. Scientists who replicated this scenario in the lab with mosquitoes and bedbugs were unable to spread HIV between membrane-enclosed blood sacks, according to the journal AIDS.

Even without the risk of many blood-transmitted diseases, mosquito bites are dangerous. Most people who develop West Nile virus do not have symptoms, but about 1 percent develop serious neurological problems, such as brain swelling. There were 183 West Nile virus cases in Texas in 2013 and 379 in 2014. There is no way to tell how many cases there will be in 2015 — as of June 23, the CDC has reported two confirmed cases in Texas. It is therefore in everyone’s best interest to avoid getting bit this summer.

There are many ways to avoid mosquito bites, including avoiding infested areas, wearing protective clothing and applying insect repellent, according to the New England Journal of Medicine. Mosquitoes are attracted to carbon dioxide, which means they are more likely to bite larger people and those breathing heavily. This means people taking a jog need to move more quickly than mosquitoes — which shouldn't be difficult, since they move at about 1.5 miles an hour.

Mosquitoes are also attracted to sweat, but not fresh sweat, according to a study in the Journal of Chemical Ecology. They prefer sweat that has been partially broken down into ammonia by the bacteria on human skin, making them especially attracted to one of mankind’s most despised odors — unwashed socks.

UT students who like to run around in the evening in unlaundered clothes do not have to worry about contracting hepatitis or HIV from mosquitoes. However, West Nile virus can have serious consequences.

Follow scientist’s recommendations for a safe summer — the deadliest animals on the planet can be thwarted by basic precautions.