Graffiti should not distract from lack of action on Davis statue 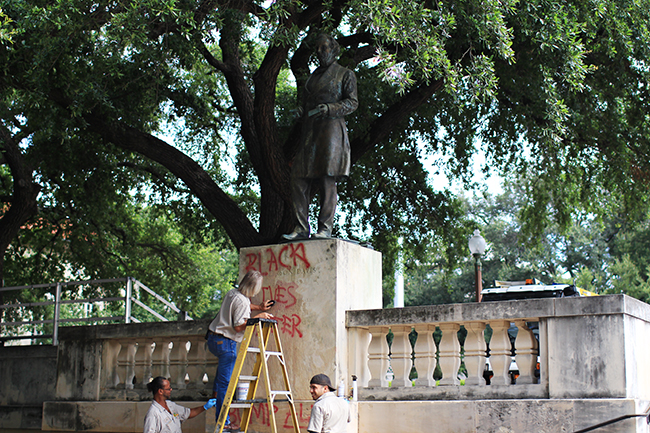 In the aftermath of the tragic shooting in Charleston, South Carolina, a hate crime which left nine people (including a state senator) dead, debate has been renewed on Confederate imagery that remains present in the South. No image is more notable on our campus at present than the statue of Jefferson Davis, former president of the Confederate States of America. UT Student Government President Xavier Rotnofsky and Vice President Rohit Mandalapu, along with others in SG, have called for it to be taken down, with good reason. The statue stands next to George Washington, the man who created the Union that Jefferson Davis so bitterly fought. It is an outdated, racist statue. Taking it down should be a no-brainer.

The Davis statue was originally erected to be a symbol of our University community’s reconciliation with its troubled past. It was erected, along with statues of several other Confederate and Union leaders, after World War I as a symbol of the country’s true reunification following the Great War. While I respect its origins, in contemporary thought, it figures largely as a prominent symbol of something much darker. The UT community and our visitors may not be aware of the intentions behind its placement. What many visitors to our campus see is simple racism.

Progress in removing the statue, however, has been slow. So, it was no surprise to learn that the statue had been tagged for the third time with graffiti Tuesday in bright red paint that stated “Black Lives Matter” as well as Rotnofsky’s line “Bump All The Chumps,” a reference to booting Confederate imagery off campus.

While the graffiti was certainly not the best response to the lack of progress made by UT President Gregory Fenves, it was not as problematic as many have cast it. Numerous members of our campus community and the Austin community as a whole have criticized the graffiti, including UT SG Assembly Speaker Tanner Long, who called it “childish.” The graffiti also received critical national press, including stories by the Dallas Morning News, among other publications.

Despite the understandable criticism of the graffiti, the issue with this statue is much larger. And the graffiti is not so great of an issue when put in perspective of the situation at large. It is indeed a nuisance to clean up, but it is a reaction to a startling lack of action on the part of UT-Austin administrators. Our campus community should be much more concerned with the fact that Fenves effectively punted the decision to remove the statue further down the road, creating a pointless committee whose evaluation may take months, instead of making the easy — not to mention, correct — decision to remove it and place it in a museum.

Instead, the graffiti got the headlines.

Criminal activity should always be taken seriously. But we should not be focusing on a small-scale, petty misdemeanor borne of months-long frustration; we should be loudly voicing our displeasure with Fenves’ irresponsible delays in regards to this statue and other symbols on campus. It is clear that our campus wants it taken down and sent to a museum.  A committee to investigate this is a wholly unnecessary stalling tactic. Where is the outrage about that?

Fountain is a government senior from Pelham, New York.