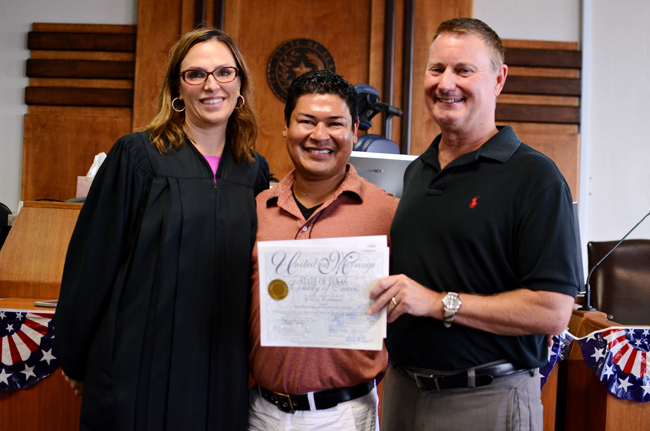 Attorney General Ken Paxton said in a written opinion June 28 county clerks may refuse to grant a marriage license to a same-sex couple if doing so violates their personal beliefs.

“County clerks and their employees retain religious freedoms that may provide for certain accommodations of their religious objections to issuing same-sex marriage licenses – or issuing licenses at all, but the strength of any particular accommodation claim depends upon the facts,” Paxton wrote.

Paxton also said under the Religious Freedom Restoration Acts, government employees should have an easier alternative to being forced to issue marriage licenses that infringe on their beliefs.

Opinions issued by the attorney general may have persuasive weight with the courts. However, the courts decide the applicability, meaning or constitutionality of a law, according to the Texas Attorney General’s website.

Before the U.S. Supreme Court ruled June 26 that same-sex marriage is a right protected by the Fourteenth Amendment, Paxton asked county clerks of Texas to refuse marriage licenses to same-sex couples.

"[W]hatever the ruling, I would recommend that all County Clerks and Justices of the Peace wait for direction and clarity from this office about the meaning of the Court's opinion and the rights of Texans under the law,” Paxton said in a statement June 25.

Paxton and Lt. Gov. Dan Patrick will try to override the Supreme Court’s ruling, but they have no authority to do so, said José Andrés Araiza, vice chair of Equality Texas, on June 26.

“Paxton and Patrick will try to find a loophole to prevent the ruling from happening,” Araiza said. “[T]he Supreme Court is the highest court in the land and today’s ruling is the law of the land. As an elected official, you have to follow the law.”

To check out our coverage of the same-sex marriage announcement Friday, click here.