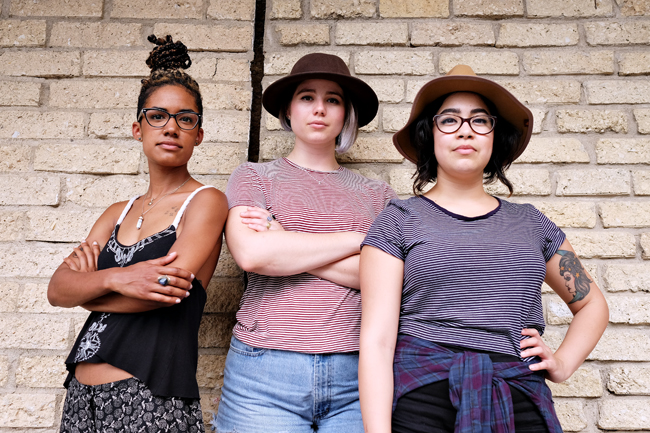 When 500 of Austin’s BossBabes gather once a month, they work to fulfill one common goal — empower local female creatives.

Founded in May by UT alumnae Jane Hervey, Leslie Lozano and Ashlee Pryor, BossBabes ATX or #bossbabesatx is a community of women that hosts a series of meets, workshops and celebrations to promote women’s creative passions.

“It’s supposed to be a safe place for women to express their creativity in the most open form possible,” Lozano said.

Hervey said BossBabes is a positive environment for women to connect and address gender inequality in the workplace, which she feels has led to a disparity in female professionals.

“It’s also serving a different purpose which is just to get the conversation going,” Hervey said. “And to get rid of barriers, which are not talking to other women about the work that we do or what we should do in certain situations in the work place.”

After months of planning their first meetup in May, Hervey said she and her co-founders never expected they would welcome 250 women — and, by June, that number doubled. Hervey said BossBabes has received recognition and opportunities they never imagined.

“We’re at this point where all we wanted to do was connect women and industry to each other, but we’re getting all these other opportunities because it’s gotten so big so fast,” Hervey said. “It’s really interesting to see that type of growth and have to adjust accordingly.”

Women show up to meets intending to network, collaborate ideas or meet another professional. It’s important, Hervey said, to get women talking in one room and create the connections they need.

“You can feel that energy and that power, and it’s motivating and inspiring,” Hervey said. “You can’t get that same feeling online.”

Graphic designer and letterer Lindsay Eyth, whose company, eythink, participated as a vendor at the June meet, said she enjoys BossBabes because it gives women a chance to meet each other without intimidation from male co-workers.

“I think something about the vibe in the room and being around like-minded women kind of cuts through a lot of the pretense of networking events,” Eyth said. “People just get right down to business.”

The founders said they do not believe BossBabes is anything radical; they are simply getting women to discuss their work and their passions.

“I kind of hope that BossBabes makes [women’s collaboration] non-revolutionary,” Hervey said. “It should be a totally normal thing for one woman to reach out to another and be like, ‘Let’s do work together. I appreciate what you’re doing.’”